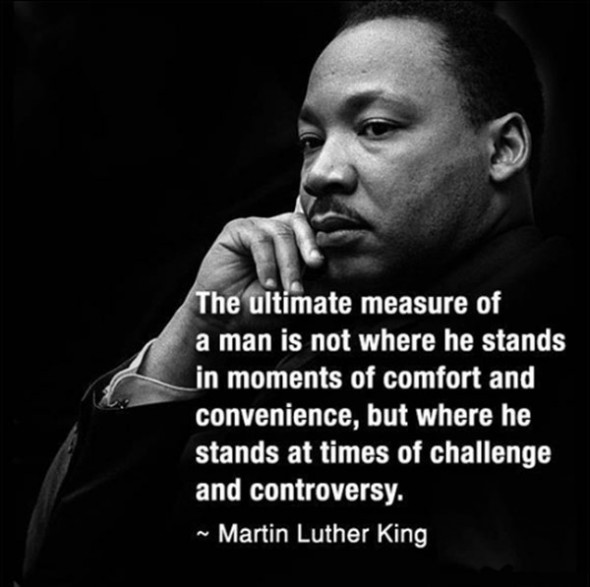 Whenever Martin Luther King Jr. is mentioned in conversation, we can hear the phrase play in our head at some point. “I have a dream… that one day… this nation will RIIIIIIIIIISE up… and live out the true meaning of its creed.” These words are both powerful as well as iconic. What one might not realize though is that those words center around what was arguably the most prominent piece in MLK’s leadership style: Having a vision. King believed that in order to become a successful leader, one must be able to communicate their vision to their followers. These kind of people were the ones who had the ability to stand up and challenge the status quo. Quite frankly, it is difficult to argue against him, seeing as the most popular world leaders, at one point or another, led their followers with a concrete idea of the future already in mind.

Another significant and memorable way in which King led in his leadership style was his ability to be courageous. However, King’s courage showed, not through an ability to use brute force to assert his opinions, but through his own method of dealing with confrontation and injustice with peaceful protesting and non-violence. King’s style was tremendously influenced by Mahatma Gandhi, a man known for leading his people through non-violent, disobedience demonstrations. King showed this ability to be courageous through his demonstrations, walks, sit-ins and speeches.

There is a consensual agreeance on labeling Martin Luther King Jr. as a leader in his time. The man was primarily responsible for leading the masses in America through the Civil Rights movement of the 20th century. King had a vision that his children would someday be able to attend school and be recognized as equals to the children of his peer group, regardless of race or origin. He took that vision and created a movement. This movement sparked what would eventually become the downfall of major segregation in the United States.