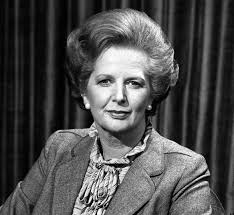 Few leaders have the distinction of being so influential as to have an ideology named after their political philosophy. Margaret Thatcher is one of them. Her politics touted free markets, minimalizing of government spending and self-reliance. Thatcher seems to be a born leader who came from modest beginnings. Her sharp wit and drive served her well in her political career enabling her to become not only the first woman to serve as Prime Minister of the UK, but a leader of significant influence and importance.

Thatcher’s strong leadership style was not without its critics, although criticism seemed to only fuel her will even more. Thatcher had this to say about criticism: “I always cheer up immensely if an attack is particularly wounding because I think, well, if they attack one personally, it means they have not a single political argument left.”

Yury Gavrilov was a journalist working for Russia’s Red Army newspaper when he coined her infamous nickname “The Iron Lady”. That moniker is rightly credited as having solidified her political standing and aptly defining her character.

“Margaret Thatcher, Milk Snatcher” was another nickname that gained some traction earlier in her career. That name was earned when she abolished free milk from public schools. As silly as that name may seem, it offers some great insight into her philosophical point of view, a philosophy of self-reliance that detested the giving or receiving of handouts. This manner of belief was what made her both popular and condemned by so many.

To call her a determined unswerving authoritarian with moral conservative tendencies might be as close to a label for her leadership style as someone could get to put this unique global powerhouse into a category. While her decisions and career are still highly controversial, the fact remains that her influence and impact is still felt throughout the world and will continue to be for some time to come.

With the help of:  Sholpan Zhaksybaeva, Krista Kull and Emily Nichols