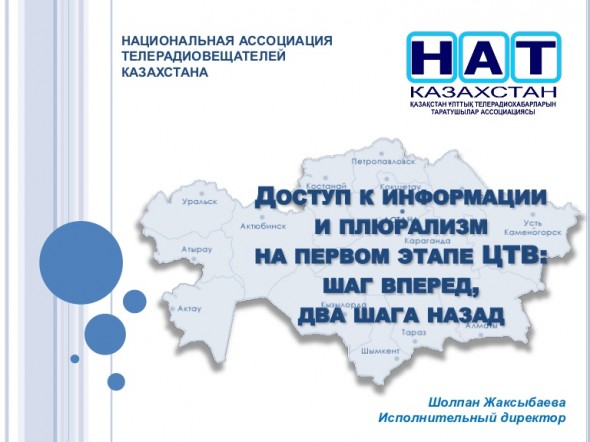 My name is Sholpan Zhaksybaeva. I have come from Kazakhstan. I graduated from the journalism school at Kazakh National University. I worked as reporter and correspondent for several newspapers and TV stations. I worked as Editor-in-Chief of the National newspaper “Stolitsa”, and I lectured on journalism and mass media in Kazakh-American University. In 2005 I became the executive director of the Kazakhstani National Association of Broadcasters (NAB).
Our association is a union of more than 60 independent TV and radio stations. In a country like Kazakhstan, where the media landscape is dominated by state-controlled mass media, it is very important to develop alternative sources of information so people can have access to different sources of information and viewpoints.

When I joined this association it was just a branch association similar to hundreds other ones in Kazakhstan. It was more focused on creating a positive image with authorities rather than keep the government accountable. When I became the executive director, my journalism background helped me to make deep changes in the association. First I redirected the mission of the association by putting special emphasis on plurality of information, freedom of speech, demonopolization and mass media standards. After one year under my supervision 60 % of the association’s members wanted me to resign, but a few people on the Board of Association valued my efforts in changing the strategy of NAB and wanted to keep me in my position.

A few years later, NAB was included into the main influential governmental commission in broadcasting. I was the first representative of civil society in it. Even though I was a member of the commission, I never stopped critiquing the activity of the government in the realm of broadcasting. I made a lot of addresses to the General Prosecutor, President of Kazakhstan, OSCE reporting on the facts violations of the law and mass media standards that may threaten the democratic development of mass media in our country. The association became, in some degree, an opponent of the government, but over time they began to understand our mission and considered our critiques constructive. At the moment the association is a member of two governmental commissions and several governmental workshops. The association is considered to be one of the influential NGOs in Kazakhstan, and I am very proud that my contributions lead to a great result.

I shared this example from my personal background to illustrate that leaders may sometimes face obstacles. If leaders believe in their ideas then they should not give up and should follow their personal convictions because eventually the ice will be broken and great positive changes will happen.

4 Comments on “Learning about leadership through personal experience”