This year’s Hubert H. Humphrey Fellows at the Arizona State University are expected to do a presentation on Climate Change at the upcoming Global Leadership Forum to be held from November 2 – 6, 2014. The Fellows are to join other International Fellows who are presently in the United States from around the U. S to share perspectives and chat the course for future action to address Climate Change.

ASU HHH Fellows presentation tagged “If it’s global, it’s about you,” will feature among other things a Polar Bear in an interview people about their view on Climate Change.

But actually it was not until recent media reports, that the issue of Climate Change ranks as the third popular issues in the elections and with other issues of national concern, jerked me up and had me thinking about how it apply to my Country, Liberia. Then the tag of our presentation, “If it’s Global, it’s about you,” actually hit home to me.

Liberia’s 350 miles of coastline encompasses coastal lagoons and mangroves as well as beachfronts. Climate change has already started to impact the country, with heavy rains, flooding, storm surges and erosion along the coast.

The Liberian coast has been subject to serious erosion and storm damage at many points. Abrasive currents, high-energy wave patterns and storm surges combine to create serious levels of coastal erosion.

According to a Global Environment Facility report, Forecasted global climate change, leading to rising sea levels and increased intensity of storms, is predicted to accelerate at the present catastrophic situation of coastal erosion. The anticipated impacts are potentially disastrous, and are likely to include: the exacerbation of poverty, the destruction of rural infrastructure (markets, roads, centers, clinics, etc.), and the destruction of land and livelihood equipment (boats, mobile market stands, stoves, etc). These factors are to affect the most densely populated areas and the lives of large numbers of poor people.

Already the homes and businesses of thousands of poor people living on Liberia’s coast are being swept away by rising sea levels. 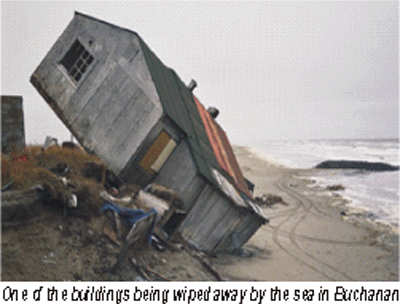 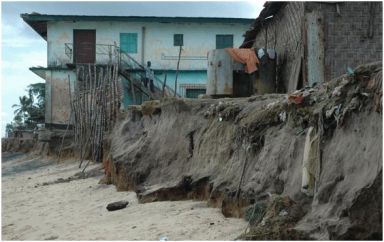 In response, the Liberian government had started addressing this issue from several fronts, including a jointed project with the UNDP, tagged “Enhancing Resilience of Vulnerable Coastal Areas to Climate Change Risks.” The project is expected to focused at the community level, in three specific areas: to develop the capacity to protect the coast at the county and national levels, the enabling environment to sustainably manage and protect coastal resources will be enhanced, improving areas such as sectorial reform, policy reform, strengthening institutions and encouraging education.

The Liberian House of Representatives also passed into law an Act establishing a Coastal Defense Fund in Liberia to protect the coastal belt against coastal erosion by employing navy of the hard and sift engineering technologies such as beach nourishment, construction of sea walls, boulders, revetments, groans and gab ions.

Now these may seem like a tiny punches in a fight against a giant, yet as the issue of Climate Change is continuously been highlighted, you and I representing families, communities, societies and nations, yea the world, are at the table now to chat the course of history in addressing Climate Change, thus If It’s Global, It’s About You.

One Comment on “Climate Change, how does it concern me and you?”