There are many factors that endanger wildlife, but one of the most dangerous current threats is global warming. Although it’s a controversial subject, the National Wildlife Federation has reported on how animals and their ecosystems have been affected by global warming in a series of reports called, “Wildlife in a Warming World.” 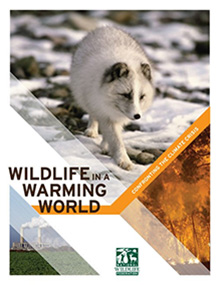 When I was younger, I remember learning about how global warming affects animals such as polar bears because of their melting habitat, but I don’t remember learning much about the impact it has on other species that don’t suffer from melting ice. I think it’s easy for people to forget that birds, butterflies, and even coral have had to deal with the results of global warming due to changes in their habitat.

The report highlights the challenges that wildlife face and how we can confront these serious issues. For example, one of the concerns is that many species of animals migrate, nest, or mate according to natural events, such as changes in temperature and daylight. However, as a result of global warming, the animals may get confused and end up out of sync with other species. They may end up migrating earlier than usual or waking up from hibernation too soon, causing them difficulties finding food.

Higher temperatures can cause more wildfires, melt Arctic ice, and cause water levels to rise, all which threaten wildlife habitats and ecosystems. The Natural Resources Defense Council said that the average global temperature has risen at the fastest rate in recorded history during the past 50 years. If temperatures continue to rise, there will continue to be drastic consequences for wildlife.

Luckily, there’s ways that we can help reduce the impact of global warming on wildlife and the environment. The National Wildlife Federation explains how you can save energy, conserve water, and be more green. It would be sad to live in a world where polar bears are extinct and butterflies aren’t fluttering around everywhere, and it’s up to all of us to help save the wildlife.

3 Comments on “Wildlife and Ecosystems in a Changing Climate”