The Global Leadership Forum (GLF) is a unique platform where all the Humphrey fellows from the different US Universities come together once a year. This year, the forum was held from the 3rd to the 7th of November 2014 at Marriott Key Bridge Hotel in Arlington, Virginia.  The first day of GLF we warmly greeted each other, made acquaintances with our honored guests and new fellows, and expanded our networks with new ties. My first impression was that we have a huge and diverse Humphrey family! I was so glad to see the fellows from Sacramento State University again where I spent two wonderful and unforgettable months in my Pre-Academic Program. Before going to Arizona State University and concentrating on journalism I met a lot of friends/ fellows from different countries and fields of study; such as, finance, political science, agriculture, legislature, medicine, and public policy. I met many new friends at GLF.

The GLF was opened by the speech of Judith S. Gibson, Director of Humphrey Fellowship Program and Assistant Director Amy Nemith. She said that this year 300 fellows from ninety six countries were attending the Global Leadership Forum. She said that to be a leader means not just to have some type of job, but a job that may contribute to the development of your country. And only a man who is not afraid of challenges may maintain it.

The most unforgettable moment for me was when I met Anne L. Howard-Tristani, Hubert Humphrey’s niece, and Hubert Humphrey’s grandson, Jordan Humphrey. Their speeches were full of inspiring words that touched my heart and stayed with me.

When I came to shake hands with Jordan, he immediately told me, I know your name is Sholpan, you are the head of Association and you are from Kazakhstan. I flushed red and was embarrassed thinking that I am so popular in the USA … I was a bit lost and he laughed at my reaction. He responded that he I just carefully read the leaflet about the presentation of your group. 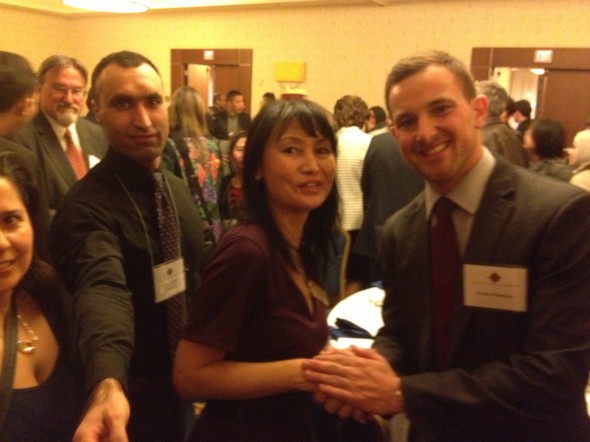 Another part of the conference was when the Fellows participated in a number of  group discussions on climate change issues and resilience. We worked out several solutions on the most challenging issues in our regions. In general I liked the division of sessions according to regional principle.  It helped us to concentrate on concrete types of problems and solutions. I think that presentation of Arizona State University on Global Warming was one of the best and vivid ones at the GLF. The audience was greatly interested and asked a lot of questions from our presenters Krista and Omar.

I also really enjoyed the State Department Reception, where i met a lot of new friends. I was so glad to see representatives from the Kazakhstan Embassy. I told them about my experiences during my six months in the USA. They were very proud that I was the only person to represent such a huge country like Kazakhstan in the Humphrey Program.

I would like to thank representatives of IIE – Judy Gibson, Diana Shapiro, Kristina Jenkins, Caroline Dolive, Lauren Stewart, Emily Heddon, Henry Chambers who helped make the event a success. And my huge thank to Dr. Bill and Kristi Kappes who several months  lead us to this success at GLF. I am sure that it was a big success.

One Comment on “Global Leadership Forum: Widening my Leadership Horizons”