“I assure you, from the perspective of African Americans or Latinos in poor communities who have been dealing with this (racism) all their lives, they wouldn’t suggest somehow that it’s worse now than it was 10, 15 or 20 years ago.”
President Obama, NPR interview 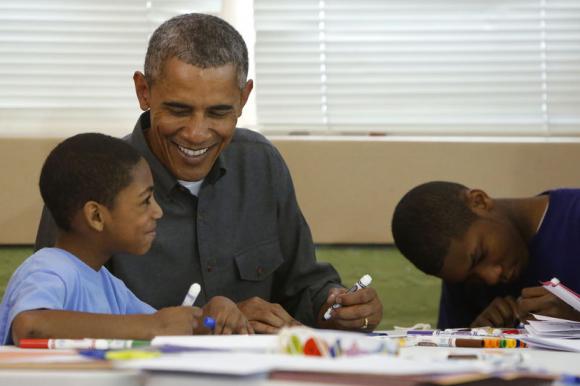 As the first African-American President of the US, Barack Obama is the highest political beneficiary of the suffrage fought for by Selma demonstrators. His handling of race relations today is being examined in the context of Martin Luther King Jr.-led Civil Rights movements 49 years ago. Photo Credit: Reuters.

Wallace is cast as a “segregationist” democratic governor, although some reviewers suggest his characterization in the movie may have been exaggerated. The coverage in national papers of ferocious, inhumane and degrading bludgeoning of the blacks horrified television viewers and newspaper readers, galvanizing American people across races and states to participate in the Martin Luther King Jr.-led peaceful demonstrations.

Governor Wallace was a populist and four-time losing presidential candidate. Not only did he actively encourage discrimination against blacks but (according to the movie) sadistically deployed the state’s coercive forces to repress, shoot and ill-treat unarmed, peaceful demonstrators seeking, among other things, the right to vote and be treated equally as all American citizens. 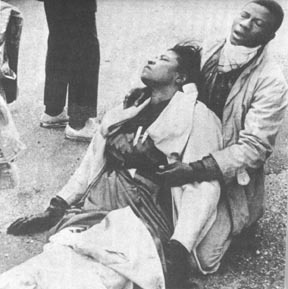 Amelia Robinson, together with her suffocated rescuer, pass out after a violent police attack at Edmund Pettus Bridge in Selma in 1965. Photo Credit: SchillerInstitute.org

Unlike Malcolm X, inclined both in real life and the movie to violence and only gravitating to peaceful means temporarily, King Jr. pitched exclusively for non-violent means to overcome the segregation.

The demonstrations King and others led resulted in President Lyndon Johnson signing the Civil Rights and Voting Rights Acts, which for the first time handed blacks the right to vote and be voted. 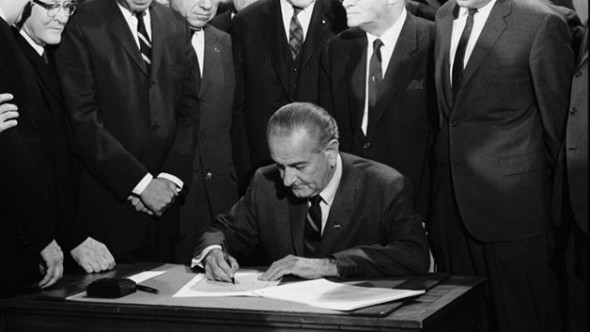 The signature that authorized Black Americans to vote and be voted for elective offices. Photo Credit: www.bet.com

This breakthrough laid the foundation for the election on November 8, 2008 of Barack Obama as the first African-American President of the United States.

In acknowledgement, the Reuters news agency reports that Obama will next month visit Selma, Alabama, to “recognize the 50th anniversary of [the] historic marches …against segregation”.

Last year, racially tinged riots enveloped Ferguson — spreading later to other American cities — after a white police officer Darren Wilson shot dead an unarmed African-American teenager, Michael Brown. It was an outburst of cumulative anger by protestors who feel marginalized by law and disadvantaged economically in their own country.

One strand of the argument, therefore, is that African-Americans still strive for equal treatment in law and fact, better opportunities and social justice. Many however are thriving whether in sports, entertainment or other professions/occupations.

The vandalism by Ferguson protestors however sharply contrasts with Selma’s non-belligerent marches and defile the sanctity of King Jr.’s doctrine of non-violence; to remove darkness with light, defeat hate with love.

A decision by Missouri Governor Jay Nixon, a democrat rumored to harbor presidential ambitions; to deploy the National Guards and the accompanying military-grade response by police resurrected Wallace-era voter-targeted political populism and executive excesses. It peels the layer off the ulterior motivations of some leaders and their patronage calculations in every action and inaction.

However, a more equal observance of civil rights has evolved in the US with irreversible, even surprising, gains.

Ferguson flamed when the current US President Obama, Attorney General Eric Holder and Homeland Security Secretary Jeh Johnson — under whose purview fall justice administration and enforcement of civil rights — are all African-Americans. They would, without the constitutional reforms instituted by President Lyndon following the Selma events, be legally deprived of suffrage.

The latest widespread reports of arguably racist encounters (mostly between police and African-Americans), President Obama argues, have more to do with technology that enables instant sharing of information on multiple media platforms rather than a spike in these incidents.

Both the actors in Ferguson, just like King Jr. and Governor Wallace, pandered to the public gallery. For instance, King Jr. aborted at Edmund Pettus Bridge a demonstration that had attracted thousands of all races, once police withdrew and allowed them uninhibited pass. Why? Because King Jr. discerned that a lack of confrontation meant their story would not dominate news headlines. This means he aimed to cultivate publicity capital to popularize the agenda of his activism. 49 years on, in Ferguson, demonstrators huddled, chanted and gestured vivaciously at most whenever journalists focused their cameras on them.