Thousands of studies and experiments are done do control weight and to build a dietary plan. Traditional and alternative medicine offers hundreds of solutions and psychologists work on dietary problems. However, most of the clients are not satisfied. There is a huge money flow in making plans, TV programs, medications and consultancy in this sphere. And when the scientist and programmers join in on this – more progress occurred. A group of young scientists managed to come up with a solution to control the food while you are eating it, just in the moment when the food is in your throat. A smart necklace counts the quantity and the quality of the food and turns it into calories. 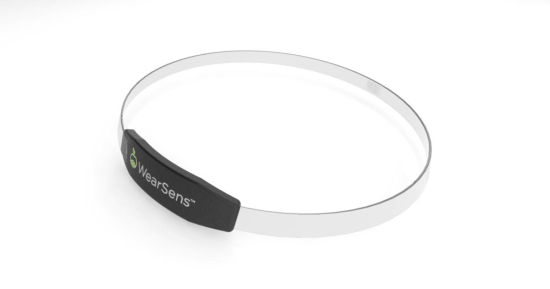 Three students from University of California Los Angeles created the WearSens – a clever necklace that tells you when to stop while eating and how much you already ate. Hayk Kalantarian, an Armenian student, is one of the three members of the WearSens team. He mostly worked on programing part of the necklace. It took him two years to reach today’s result. The WearSens team released a video to show how it works.

The idea is that sensors track the vibration that occurs in the neck when a person chews food and swallows their drink. It will tell them if they’ve been snacking too much. It will tell them if they’ve been dehydrated because they did not drink enough water. Our upper chest is a cavern that rumbles with every gulp of food and breath of air. The necklace is sensitive to mechanical disturbances. As food or liquid moves down the throat, it creates quakes that rise to the skin around the neck, and the sensors record the tremors. Each food makes a distinctive pattern. Here is the infographics I made to explain this.

This innovation will literally cover a series of dietary studies. A lot of prescriptions, consultations with doctors and diet plans with psychologists will not be needed when you just wear your necklace and look through your own food flow on your own smartphone and reach to your own goals.

One Comment on “Wear your food diary around your neck: WearSens”