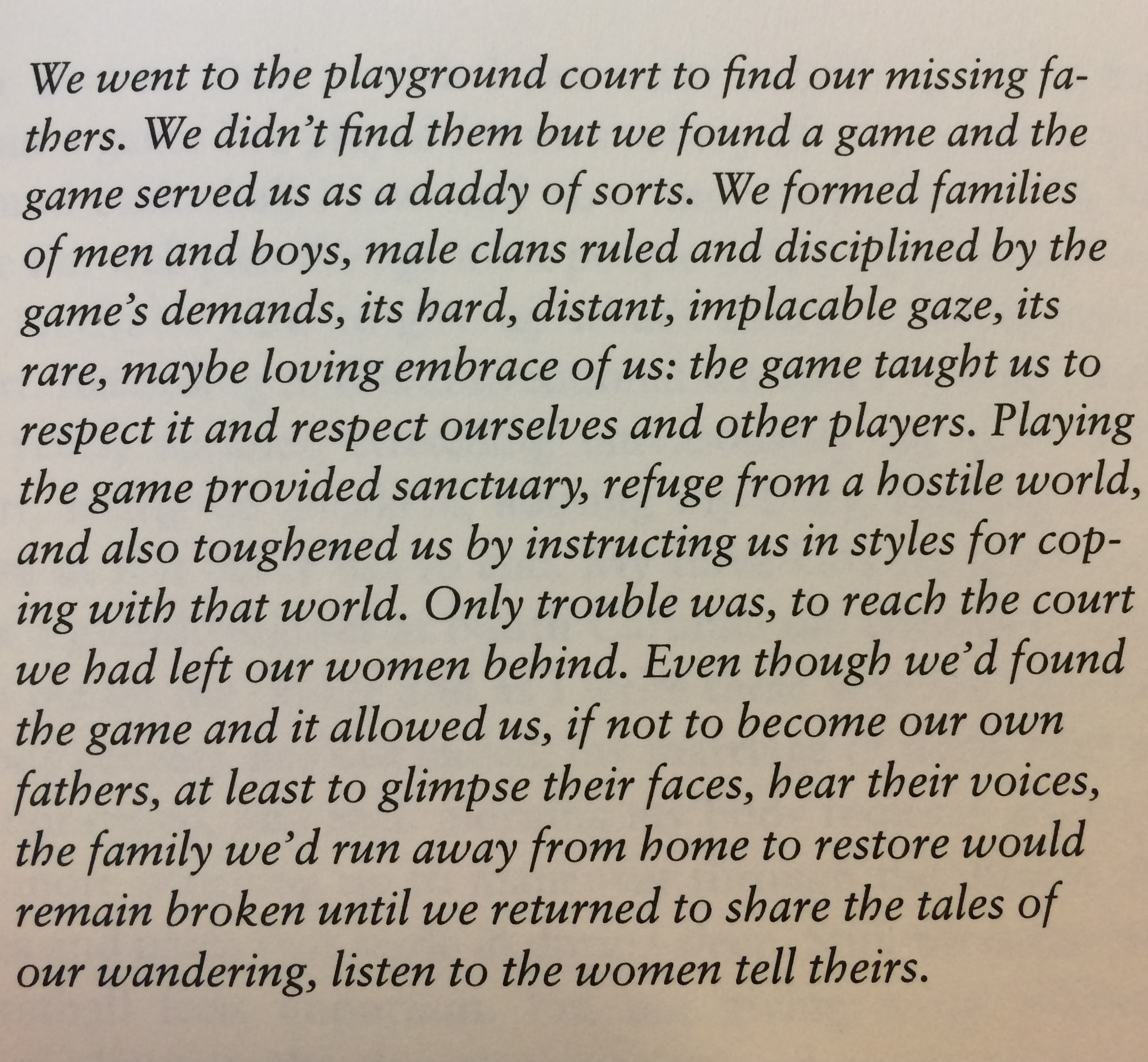 John Edgar Wideman’s Hoop Roots is a moving memoir about a man who has to come to terms with his own mortality. After playing basketball all his life – through high school and college, three years of pro-ball in Europe and pick-up since – Mr. Wideman talks about how his body can no longer allow him to physically do on the court what he imagines in his mind. But as he reflects on this, along the way, the narrative becomes about more than just the game. It becomes about what the game of basketball can teach us about life and our place in it.

However, we are here to talk about something else: leadership. Or may be the two are related. So here are three key lessons from the book that we can garner about basketball and leadership.

In Hoop Roots, Wideman writes that at the ball parks out there talent alone is not enough to build success sometimes. You need collaborators to help you get to where you want to go. In his words:

And there was no clearer manifestation of this than when the San Antonio Spurs completely annihilated the Miami Heat in five games to win their fifth NBA title. While the Spurs do have some talent, they did not come close to matching the almost superhuman abilities of Lebron James’ Miami Heat? How did they do it? Here is a demonstration.

Because of such team work and a collaborative supporting cast, Wideman’s vision can be seen to manifest in the San Antonio Spurs. And that is how they were able to overcame Lebron James and his Miami Heat to secure one of the most dominant victories in the history of the NBA Finals. The victory was so overwhelming that Mr. James left the Heat to go back home and rejoin his hometown club, the Cleveland Cavaliers.

One thing that comes through about leadership from the book is the notion that challenging conventional wisdom and the status is an important character in being a leader in your area of expertise. So, for example, Wideman quotes Marcel Proust saying that, “before Renoir painted them…there were no Renoir women in Paris. But after Renoir painted them there were, you saw them everywhere.”

We see leaders of this kind in basketball, especially among the greats. In that quote, Wideman refers to the transformative effect Michael Jordan had on the game.

But I would like to showcase another innovator whose style of play completely changed the way we have come to view his position: Dirk Nowitzki. For a long time, 7 footers were perceived to be players who banged in the paint. But not Dirk. He came into the NBA and started shooting the ball the way guards do.

And all of a sudden we started talking something that is now commonly referred to as a stretch four, a tall dude who can shoot the basketball like a 6 ft 6 guard.

This is leadership, changing the way people think and do things before you came along. Basketball teaches us this as well.

In order for a leader to inspire followers, you need to have a clarity of vision that people can follow. Wideman writes that part of what basketball does out there on the court is allowing one’s true identity to reveal itself. As he puts it:

The playground game is molded to shape perceptions, ideas, feelings, man have discovered about themselves, and it tests their beliefs about what’s important, establishes a sense of identity.

For a more recent example, revert back to the story of “Linsanity.” Here was a kid who came out of nowhere and came to dominate headlines, at the so-called the world’s most famous arena Madison Square Garden, as a New York Knicks point guard. How? Playing the game revealed his true character, as this documentary about him reveals.

So, one needs to learn about what one is about before one can lead, as Wideman points out and as Jeremy Lin came to discover in his magical journey three years ago.

For me, my love of basketball, emanates from the beauty of the game and what that beauty reveals about the possibilities of life. Last December I wrote about what Jazz has taught me about leadership. It seems only fitting to end this piece with reflections of one of the greatest trumpet players of his generation on the game that I love.

One Comment on “Hoop Roots: What Basketball Can Teach Us About Leadership”