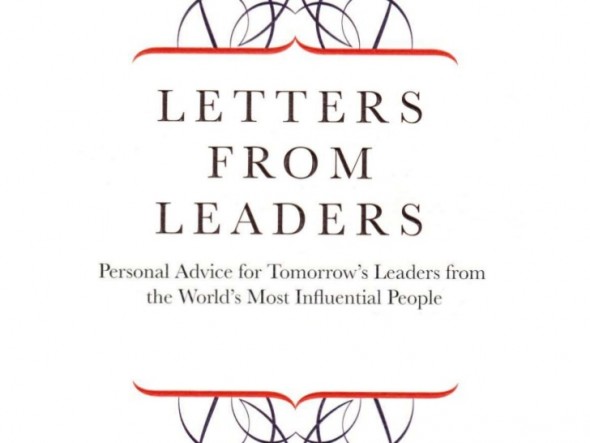 The book entitled “Letters from Leaders” is the collection of original letters specially requested by Leaders magazine from the world’s most influential people. The “Letters from Leaders” comprises nearly eighty letters from those who have done so much to motivate and shape our world today. The author Henry O.Dormann brings together the first-ever exclusive collection of wisdom and inspiration from the world’s most influential people – advice on leadership, goal achievement, public service, and life journeys. It is very interesting to read these letters written by those who know the subject of leadership themselves as they become true and influential people. The letters, some facsimile reproduction of handwritten originals, are each introduced with a biographical note by Dormann.That is why every line is full of wisdom and their life experience. I liked all the letters, especially those that were written by hand. Hope one day some of us, Humphrey fellows, will get request from Leaders Magazine to share our ideas on leadership as recognition of our success. Here then are some quotes from that letters:

Gerald R. Ford, Thirty-eight President of the United States
“Instead of following some of demagogic person that distorts the truth, you should be informed on all sides of an issue and then be energized to be involved and to know all of the facts and ramifications. I am still convinced that truth is the glue that holds not only our government together, but also civilization.” (p.30)

King Abdullah II, King of Jordan
“ I have always found that one’s confidence and positive attitude in dealing with issues, challenges, and difficulties usually secure over half of the victory in the battle to succeed. This is true, regardless of the scope or complexity of the issue.”
Donald J. Trump:

“I am listed in the Guinness Book of world Records for having the biggest turnaround in history. I owed billions of dollars in the early 1990s and many people thought I was finished. Even the newspapers were announcing my demise. The difference is that I didn’t believe I was finished for one second, no matter what people thought. I simply refused to give in to negative circumstances and kept working. In short, I refused to give up. I am now far more successful than I ever was.”
Gerhard Schroder, former chancellor, Germany:

“ Be self-confident. Never give up. Always have a plan. Stick to Kant’s “Categorical Imperative”: Act so that the maxim of your action may be capable of becoming a universal law for all rational beings.”(p.24)