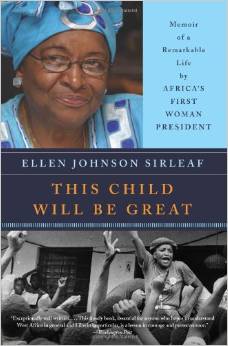 While Forbes indicates it like this, “Sirleaf’s life was remarkable.”

When I was just a few days old, an old man came to visit my parents, to see the new baby and to offer his good wishes, as people did both then and now in my country and everywhere. My mother brought the old man into the room where I lay kicking and cooing on the bed. As the story goes, the old man took one look at me and turned to my mother with a strange expression on his face.

“Oh, Martha,” he said. “This child shall be great. This child is going to lead.”

Johnson Sirleaf refers to the “prophesy” elsewhere in the book, usually with irony; her family would wryly remind her of it when, for instance, she was trapped in a physically abusive marriage, or when she fell into the latrine, or when she was locked up in prison a couple of time by dictatorship governments of Liberia at the time, with no idea whether she would be executed, raped or released.

The Book This Child Will Be Great is the incredible story of Africa’s First Elected Woman President sharing the story of her rise to power, including her childhood; her experiences with abuse, imprisonment, and exile; and her fight for democracy and social justice. It is a tale of an outspoken political and social reformer who fought the oppression of dictators and championed change. It is about a woman who spent her life talking tough to successive dictatorship regimes of Liberia.

The Book is considered an accessible walk through contemporary Liberian history, told by someone who was always in the center of the political storm; during the 1980 coup, Johnson Sirleaf, as the country’s minister of finance, was spared, while 13 colleagues were executed on the beach. After another coup attempt — this one aimed at the then President Samuel Doe — Johnson Sirleaf was taken prisoner and threatened with execution by Doe. In 1989 when Charles Taylor invaded Liberia, Johnson Sirleaf met in the bush with this wide-eyed guerrilla, determining for herself, she says, that he was not at all grounded in the cause of democracy and true social change.

It also reveals Johnson Sirleaf’s determination to succeed in multiple worlds, from her studies in the United States to her work as an international bank executive, to campaigning in some of Liberia’s most desperate and war-torn villages and neighborhoods.

In January 2006, after the Republic of Liberia had been racked by fourteen years of brutal civil conflict, Ellen Johnson Sirleaf – Africa’s “ Iron Lady” was sworn in as the 24th President of Liberia; an event that marked a tremendous turning point in the West African nation.

Finally, the book is about Johnson Sirleaf telling her story to encourage women everywhere to pursue leadership roles at the highest levels of power, and gives us all hope that we can change the world.

In her concluding chapter, the Liberian Leader writes that, “Every aspect of my life, every event, every challenge, every threat helped to mold me into the person I am today. My strong and faithful mother, my charming and ambitious father crippled in the prime of his life, my marriage, my motherhood, my education and professional experiences – all these people and experiences molded my character in some way, shape or form.”

Her desire now is to earn the Mo Ibrahim Prize for Achievement in African Leadership, a new prize rewarded annually to the retired African head of state who most significantly improves the lives of his or her country’s citizens. The winner must have also democratically transferred power to his or her successor, receives $5m over ten years, then $200,000 annually for life thereafter. The winner may also receive $ 200,000 a year for ten years toward her public-interest activities and good cause.

She writes that Former Mozambican president Joachim Chissano was awarded the first Ibrahim Prize in 2007, but there’s no reason a woman cannot win soon. “I am increasingly looking forward to that chance,” Madam Sirleaf concludes.

President Ellen Johnson Sirleaf is a recipient of several prestigious awards, including the United States Presidential Medal of Freedom and the 2013 Alfred Noble Peace Prize with Liberian Peace activist Leymah Gbowee and a Female Human Rights Activist of Yemen.