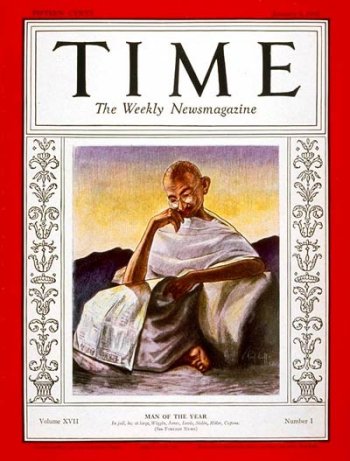 By Claire, Emma, Raj and Cody

Mohandas Gandhi (1869-1948), also known as Mahatma (which means ‘great soul’) Gandhi, is most well known for being a peaceful leader of India during their struggle for freedom from Great Britain’s colonial rule.

Born in western India, Gandhi was married at the age of 13 in an arranged child marriage. As a teenager, Gandhi traveled to India to register as a barrister to better ensure his position of leadership in his family. At 24, Gandhi went to South Africa, where he developed many of his future philosophies under the adversity of racist encounters, including being ejected from a train while traveling because he refused to move from first class. Many of these encounters with racism in South Africa led Gandhi to questioning the role of India in the system of Great Britain, and to question whether or not Indians were being treated fairly. During the Boer War, Gandhi organized an Indian Ambulance Corps to serve during the war, and fought for better rights for Indians living in South Africa.

During his struggles to gain better treatment for Indians, Gandhi taught his supporters to be peaceful in the protesting of treatment by the white-ruled government. In this TedTalk, Gandhi is used as an example of how nonviolent leadership can bring about change.

In 1915, after gaining international attention for his humanitarian efforts in South Africa, Gandhi returned to India and was greeted with respect and a degree of reverence for his efforts. In 1920, Gandhi began to lead congress and push harder for Indian Independence from Great Britain. Gandhi said that Great Britain had gained control with the cooperation of Indians, and said that non-cooperation fought with nonviolence and peaceful protests would bring about the independence that India wanted.

Gandhi often led hunger strikes to protest political actions, including when Britain separated the electoral system of India by caste and in support of other issues such as Hindu and Muslim unity.

When India gained independence with the Indian Independence Act of 1947, Gandhi was hailed as a father of the nation and a leader of the people. Gandhi fought to teach those he led that nonviolent resistance, noncooperation and tactics involved with those strategies could lead them to better treatment, independence and more positive influences in their culture. 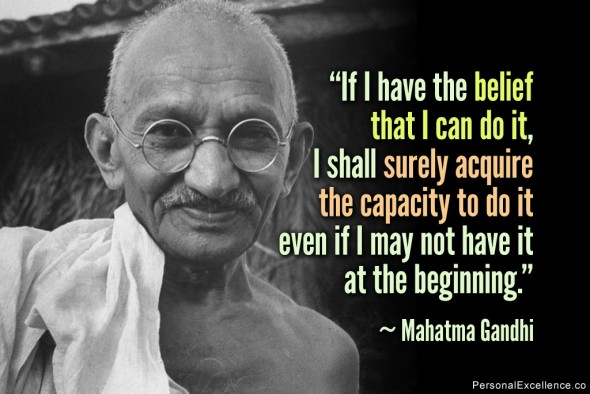 Gandhi was assassinated in 1948 by a man who opposed his nonviolent tactics and politics. Today, Gandhi is remembered as a peaceful man who bettered his nation by sticking to his philosophies and teaching others to fight for what they wanted through nonviolence and persistence. He is hailed as one of the greatest leaders of the 20th century, a revolutionary leader and is revered in India as a great leader, considered almost solely responsible for India’s climb to self-rule and independence.

Gandhi’s influence can also be seen through the works of others. Martin Luther King, Jr. and President Barack Obama, among many others, have counted Gandhi among their greatest influences in leadership and practice.

Written by: clarissaaileen on November 8, 2015.