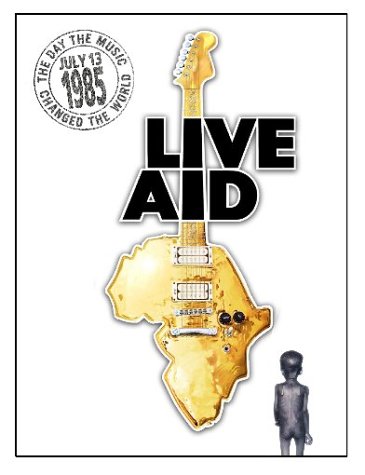 It all started with one newscast: On a fateful day in 1984, a vocalist of a punk band watched a prime time newscast that reported on the harrowing effects of famine in Ethiopia. The newscast moved this artist so profoundly that he had a vision.

The power of one vision: This artist’s vision was to bring the biggest names in music together for one day to sing a song to help bring aid to Ethiopia.

The power of one song: In December 1984, this song became the fastest selling single in the UK. It hit number 1 in 13 countries, and paved the way for a legend to begin… This song is “Do they know it’s Christmas?”

This song created an upward spiral and set the stage for a historic concert attended by more than 150,000 fans, and viewed by 1.5 billion people.

This song and vision all started with one man, his name is Bob Geldof.

30 years on, Bob Geldof is still the go-to name when it comes to music and activism, working alongside U2’s front man Bono. With three decades of advocacies and experience under his belt, he (and Bono) has unwittingly added ‘humanitarian’ to his multi-hyphenated persona of rockstar and icon.

But… you can’t please everybody

One can argue that when a celebrity gets into an advocacy, it’s all part of one big PR machinery. Blogger Alison Hill, was on point when she wrote:

“Celebrities who embrace humanitarian causes attract both criticism and praise. Many question whether they’re motivated more by the publicity rather than a genuine concern for humanity. Then there are the tax write-offs to consider.”

But the leverage one can have by using the power of fame is undeniable.
According to Justin Forsyth, CEO of Save the Children:

“In my experience, the benefits of celebrity are not fabled but real – and can produce very concrete results. Without the campaigning energies of Bono, Bob Geldof and Richard Curtis, for example, I don’t believe 46 million more children would be in school today in some of the world’s poorest countries.”

True enough, Bob Geldof’s efforts between 1984-’85 raised as much as $140 million in aid for Ethiopia’s hunger crisis. But more importantly, it elevated the ongoing famine to the world stage and made it enter the consciousness of a worldwide audience.

Subsequently, his call to end hunger and poverty continue until today. With Live Aid as the pioneer in 1985, Bob Geldof then raised his ambitious appeal to erase the debt of developing countries to members of the G8 through Live 8 in 2005. In 2014, he released a new version of “Do they Know It’s Christmas?” to help raise aid for the fight against Ebola.

The Power of One Story (a personal take)

As an executive producer of a documentary program, I am asked this one question every so often: ‘What is your favorite episode?’ And though I may have numerous stories in mind, one episode always stands out: it’s the one that got the most feedback.

So here’s the backstory, it was the 12th anniversary of our program, I-Witness, and the four teams in our show were to tackle the 4 basic needs that one must have to live which are: food, water, shelter, and clothing.

We did a story on a family who lacked shoes and clothing, whose children made rice cakes for sale to save up for their first pair of shoes. They live up a mountain in a very remote part of the country. The children had to make do with one uniform that had to be washed every night, and went down the mountain to school with bare feet.

After the episode aired, we did not expect the outpour of support that came in. We received numerous phone calls from all over the world, UK, California, Dubai, Singapore, individuals who wanted to give money, clothing, and shoes to the family we interviewed. Today, the children we documented are on their way to high school, a feat that would not have been possible if it weren’t for that one story.

There is power in one 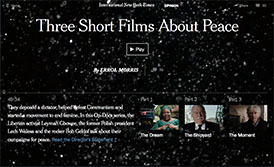 In his introduction, (which will serve as our ending in this case), Errol Morris could not have put it more simply:

“I sometimes think of myself as being as cynical as one can be. The world is bad and can’t be better. But even so, I believe that one goal for humanity should be to extend sympathy where it has never been extended before.”

And it seems that even if Bob Geldof isn’t exactly a conventional choice for a leader, we can confidently say that he has extended the reach of sympathy where it has never been extended before.

Written by: criseldacaringal on November 9, 2015.