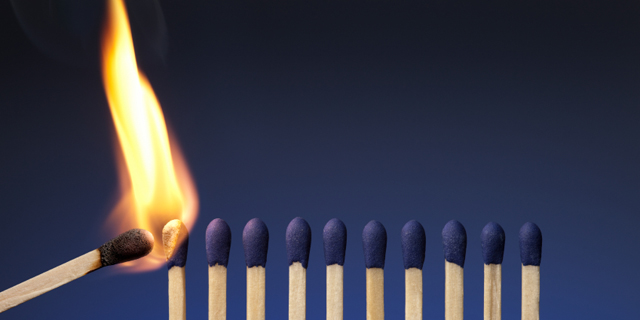 Malcolm Gladwell’s The Tipping Point illustrates — through a multitude of anecdotes, surveys and experiments — how the slightest adjustments in any given process bring about huge, industry-changing effects.

What causes the tipping

One powerful example of a tipping point is how New York City Police Commissioner William Bratton lowered the city’s overwhelmingly high crime rates of the ’90s by cracking down on petty crimes like graffiti and ticket payment evasion at subway stops. This, Gladwell explains, shows how context plays into making a difference. People are more likely to commit crime when their environments look and feel like crime should be committed there. By keeping the subway cars clear of graffiti and punishing those who go past the turn styles without paying, the police toned down the environment that was breeding much more serious crimes. Like a trickle-down effect (but going upwards).

Another example details how the children’s show Blue’s Clues built on the success of Sesame Street by emulating what made the show successful (the blending of human characters with cartoons to engage kids, breaking the show up into segments with different lessons/adventures, etc.) and capitalizing on areas where it could have improved. Blue’s Clues eventually became more successful than Sesame Street because the show’s creators analyzed data from previous shows and invested in new research about children’s attention spans. The creators made small changes when starting Blue’s Clues — the show was only 30 minutes instead of 60, there was one primary storyline per episode, there were long pauses after the show’s main character asked viewers questions, and the network replayed each new episode every day for a week.

Alan Wolfe of the New York Times described the book as “lively, timely and engaging.” He said he was fascinated with the examples in the book, but conceded that Gladwell tried too hard to bridge the examples together with his theories.

“I wish Malcolm Gladwell had chosen to use his considerable skills as a journalist to describe more examples of actual tipping points,” Wolfe wrote. “In reaching instead for theory, he reaches well beyond where he, or anyone else, can safely travel.”

I think the variety in his choice of examples was one of the book’s strong points, but I see the issue of reaching too far when bridging all the instances together under his “three rules of epidemics.” I can see how some nuance can be lost when trying to fit very disparate stories into a cohesive lesson.

Economist and author of Freakonomics Steven Levitt explains that he doesn’t fully agree with Gladwell’s logic attributing the decrease in New York crime in the ’90s to William Bratton’s tactics. Levitt argues the change happened because of the decrease in the number of unwanted children brought about by the Supreme Court’s decision in Roe v. Wade and the increase in the number of police officers deployed and trained during that time.

While I see the merit in the critiques of this book, I think the number and variety of examples Gladwell describes still provide a solid foundation for the main points he makes.

The two ideas this book left me with in terms of leadership are: 1.) It’s important to find meaning in our work so that we always look for ways to improve/potential tipping points toward success, and 2.) We shouldn’t underestimate the influence we can have on others.

This book explained both positive and negative tipping points, the negative ones including the way smoking, suicide and disease spread. But reflecting on the positive tipping points — the way a company makes a change that yields more money, for example — I noticed Gladwell’s examples all included people with a genuine passion for their work. William Bratton cared about public safety in New York, which led to his innovation in leadership and subsequent improvement in safety. The creators of Blue’s Clues cared about children’s education, so they put their passion toward making a successful model even more effective. Passion drives change; and as leaders, we can only be innovative when we have found meaning in our work.

The first section of this book, entitled “The Law of the Few,” explains how certain kinds of personality traits help epidemics spread. Gladwell explains how Paul Revere was successful in warning colonial settlers of an impending British attack during his midnight ride because he was a “connector.” Revere was a member of various clubs and organizations, ran in a number of different social circles, and was always at the center of events. Because of this, he knew exactly the people he needed to warn in each area throughout the colonies in order to spread his message. Rather than knock on each person’s door, he told key individuals in each neighborhood who he knew were also well-connected leaders; and they, in turn, spread the message across their respective communities. The influence he had by being the natural connector he was allowed the colonists to be prepared and stave off the British.

As leaders, we can find meaning in our work and recognize the way our actions influence others in order to make our leadership more effective.