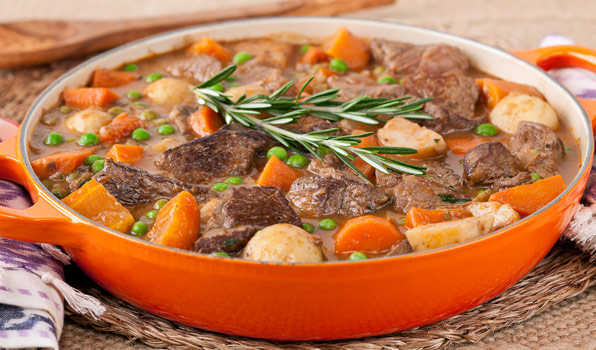 I’ve divided my leadership stew into four qualities I want to be as a leader: Committed, genuine, motivated and helpful. It’s a stew because it includes a motley assortment of examples and experiences from my life. I’ve associated each of these qualities (ingredients) with specific references, whether they’re friends who have influenced me, or books that have inspired me. Join me, as we cook up this hearty leadership stew.

I read about some incredible examples of leaders who were committed to their causes in The Tipping Point by Malcolm Gladwell. Most notably, to me, were the examples of the creators of the children’s show Blue’s Clues and the work of New York City Police Commissioner William Bratton.

The creators of Blue’s Clues built off the success of Sesame Street in terms of educational effectiveness for children. They directed a number of studies on children to find out exactly where their eyes were drawn during the show and which parts were most effective. As a result, they created a show that was much more educational and engaging for kids.

Police Commissioner William Bratton helped curb New York City’s crime peak in the ’90s by starting at the bottom. He instructed officers to focus on subway ticket evaders at the turn styles and graffiti on the subway cars. By ensuring that the cars were clean and fewer people snuck onto the trains, the crime rate decreased through a trickle-up effect, eventually causing a drop in more serious crimes like murder and assault.

As a kid, I went to upwards of 10 different camps. My favorite camp counselor, and the one who comes to my mind first as a leader, is Tiffany. I went through the typical self-identity insecurity phase preteens go through, and while I was insecure and unsure, Tiffany showed me how to express myself openly. Tiffany is always herself — incredibly caring, motivated, interested and kind — and it was really eye-opening for me to meet her at the beginning of high school. I hope to be as genuine a leader as she is.

Annie Dillard said “How we spend our lives is, of course, how we spend our lives.” It’s a scary/thought-provoking quote for a stressed college student to hear. Earlier this semester, I participated in an activity that helped me stay motivated by looking closely at how I spend my time. I broke down my schedule by every hour in each day for a week. By filling in my classes, work schedule, commute time and sleep patterns, I realized where I am really spending my time and how I could be managing it more effectively. For me, this was an important step to help me stay motivated in a realistic way.

In Andrew Cashman’s book Leadership from the Inside Out, the chapter about leadership through coaching struck me because framing my leadership roles in the context of coaching helps me view my interactions more closely. The two specific points I remember are to be patient and to remember the “why.” If we’re convinced about our “why,” our goal, it’s easier for those we’re coaching to understand our purpose and stay motivated. Patience is always something I have to remind myself to have as well, especially when teaching different people (residents, reporters) the same material again and again.

Well that’s it, that’s my stew. It’s smelling great — the kids will really love it. I’ve loved the insights I’ve gained through this course, and it’s been great getting to know everyone and glean inspiration from them as well as from our readings.