Vasudev Kutumbakam. There is an ancient phrase in Sanskrit which says “the whole world is my family.” The concept originates in the Vedic scripture Maha Upanishad which says,  “One is a relative, the other is a stranger. For those who live magnanimously, the entire world constitutes but a family”

Coming from a small state in India , the “global me” has been in a stage of constant evolution. Coming to Delhi , the capital of India, was a sort of initiation rite into adulthood for my family. My father was a graduate from the  University of Delhi. Many of my cousins had taken a similar path to the success. However, I was somehow reluctant to come to Delhi. I kept applying to the colleges in my hometown so that I do have a solid reason not to go to the Capital.

Exactly fifteen years later, I am living on the opposite side of the globe. The time difference of  twelve and half hours makes it most challenging for me to connect with my old friends in India. But as they say, every loss is another gain. I have found great friends among the Humphrey fellows. Ten people from ten nationalities. We have used each others support as an anchor through the tough transition phase.  I am eager to use this opportunity here to make friendship for life.

The most important transformation I want to bring in the “global me” would be towards understanding others.I have been an impatient listener. As a brand ambassador of India, I should be aware of my strengths. But at the same time, I should be respectful of the views of others. One way would be to listen more and speak less. I would like to be appreciative of the culture, values and tradition of people from other communities. 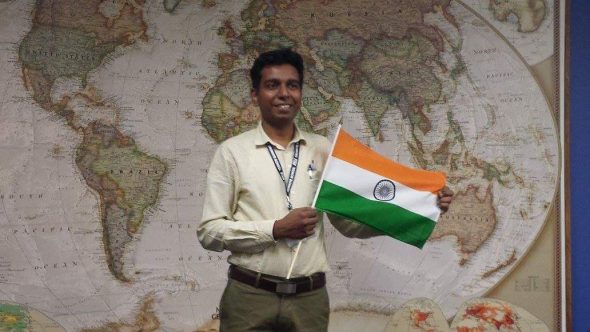 Social media now plays a very important part of my life. It is my desire to be a globally networked journalist, capable of finding friends across all countries in the globe towards collaborative exercises.  Since my friends are global and often separated by geographies and ideologies, I need to write posts in a  language that can be understood by all. It is even more important to restrain from writing anything that may be understood as offensive to others.

This Humphrey year, I want to nurture the seeds of global leadership. I want to think independently and not fall in the ‘blind mice race’.  In the twenty-first century, the media has evolved at a rate which was never witnessed before. Old business models of revenue have failed and the new business models have not been able to keep pace with the ever increasing technological demands of the new age media. In such challenging circumstances, I want to fearlessly challenge the very foundation of an assumption if it needed to be fixed.

Often when we take the unchartered path, we have a fair risk of  encountering failures. As a global leader, I want to find enough motivation to always remain positive.  I want to follow what Bob Marley says “You cant live in that negative way,  make way for the positive way.”

As a ‘global me’, I want to read much more biographies and autobiographies of  world leaders. As an audience, we  generally see the successful part of the life of achievers.  By diving deep into their lives, I will get an opportunity to look into the struggle of their life and draw inspirations towards the struggle of my life.

View all posts by observerkunal →