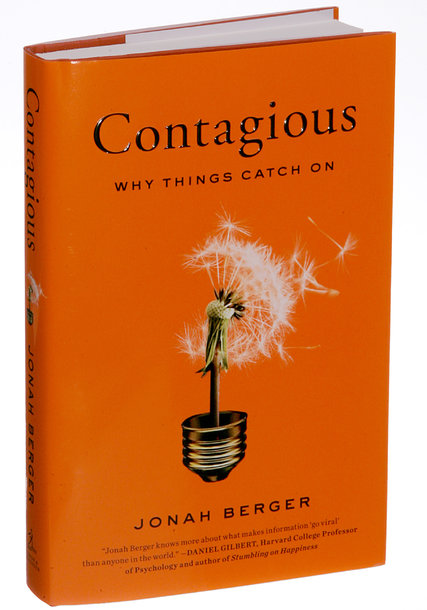 Jonah Berger in his book “Contagious” presents six principles of contagiousness: social currency, triggers, emotions, public, practical value, story. These principles he compiled into one acronym: STEPPS. According to him, these traits could shape contagious content and bring success in promotion and selling products. One of the memorable examples of the book is how people talk and buy the $100 cheesesteak at the restaurant, Barclay Prime because it gave them social currency, was triggered because it is most popular dish in Philadelphia, gave surprise and emotions. Using this example he explains all the stages of STEPPS principles. When companies launch products they probably need to consider all those aspects in messages and promotion materials because it leads to popularity.

During the reading it seems all facts are obvious and familiar, but the examples and cases give the reader peculiarities of human reaction and behaviour, and structure them in a pattern. If in the first book “Essentialism” we learned how to be disciplined in pursuing our goals and dreams, in the second book “Contagious”, we plunge into the world of spreading information about the products. The main idea of the book is how things become popular. In this text I will cover three first pillars for contagiousness.

Through the reading of the book I also found some cases from my experience. Social currency is basically the concept which explains human behaviour in a market and society. It describes why in this digital era we share photos and videos on social media because they make us look perfect. We try to avoid sharing boring messages because it makes us looking boring. Jonah Berger identified three ways of earning social currency among the audience. First is to find remarkability about your products, second, is exploiting game mechanics and the last is make people feel that they are insiders.

In Kyrgyzstan we have very popular coffee shop brand, Sierra, which was opened by New Zealand businessman Bred Brenneman. Their coffee shops are very American style. It was the first cafe where you order coffee at a desk and pay and then take your  sign with a number to your table or spot. I usually go there even though it is far from my job and we have other coffee shops near office. I order coffee there although I am not served by waitresses, like in other coffee shops. Sierra provides services that make customers feel like they belong to some specific community and the company also gives special discount cards to permanent clients. Also you can use punch card, which gives the possibility to have the seventh cup of coffee for free. Such small things matter for me and for thousands of clients. Thanks to this, the brand became one of the most shareable on social media in my country. Their loyalty programs work perfectly and the company uses social currency value in communicating with clients.

John Berger in the chapter about social currency points out remarkability as a crucial issue in promotion of brands. It is a unique characteristic of products as well as charm. I agree with him that it’s possible to find the “inner remarkability” in any product or idea by thinking about what makes that thing stand out.

He also brought an example of product, which was promoted through recommenders and did not need any advertisements. I have been working for more than five years with the non-profit organization, Legal Assistance to Rural Citizens (LARC), which had branch of offices all over the country and provided legal aid in forms of consultations as well as representation of citizens interests in courts and before officials. We had a database of clients who got legal aid, all cases were fixed and tracked electronically. For all the years that I worked at this organization, the main sources for new clients came from previous clients who received legal aid before and successfully defended their rights on land. We called this source “word of mouth.” Therefore, for me as a communication specialist it was important to share clients’ success stories.

The second principle which Berger brings to discussion is importance of triggers in marketing. The key to success in any business is understanding the psychology of customers. Marketers around the world are racking their brains on a daily basis, trying to figure out how to attract the attention of users. However, you do not necessarily have the skills of hypnosis to get people’s attention. Triggers could help professionals in this difficult matter to get closer to the human psyche. Including triggers, you run into the brain’s specific impulses that cause a person to act in a certain way. In marketing, it can be used to make users unobtrusively realize that they need your product. Basically trigger is the creation of association with a product, which consumers desire to buy. For example Nike’s slogan “Just do it!” is aimed at everyone not just fitness enthusiasts, and it inspires everyone to have an ambitious, go-getter attitude.

As a PR specialist I also observed audience activeness in social media and how they interact with my posts on the Soros Foundation-Kyrgyzstan’s page, which is another place I worked at.

I usually posted some news from the organization’s success stories but the average amount of people who liked them was not usually a big amount of users. However, I remember one post which was the most shareable. It was about project of a young activist who made 3-D sidewalks on the streets of the capital, Bishkek, with volunteers. The post immediately went viral and became popular, after the leading media outlets covered the project. We had many other interesting projects but this one became very popular because of the social message and visual presentation. Additionally, the audience was exactly right for this project because most Facebook users live in the capital.

Another example is the post about a problem with overspreading of plastic bags in environment. The post contained infographics of how many years one plastic bag is recycled. Berger says that useful information attracts people’s attention. The infographic was informative and gave useful information. It was the most shareable information because it touched emotions of citizens who felt responsibility for the protecting environment. The post included a call to action. People shared it because it was important for them and they felt themselves as a community to be responsible to spread word about this problem.

In 2016 Soros Foundation-Kyrgyzstan supported the artist’s work, an art installation called “Point of View,” which was located in one of the public spaces of the capital to bring awareness on human rights and to point out the importance of this issue for the society. Artists from Doxa Art Group suggested the form of optical art and they created giant glasses through which you can see the sign that every person has rights and should know them. Near this installation there were also events and debates on human rights related topics. Thus, in a creative way artists brought the trigger, in this case an image of glasses and connected them with serious topic. It gives hope so that the audience through that optical text could associate human rights with the image of glasses. The art gives also emotions which is important in promoting the product and services.

Gerald Zaltman, author of “How consumers think: important revelation about the nature of the market,” showed that 95% of the buying process takes place unconsciously, on an emotional level. As a consumer I would agree that an emotional connection in any promotional or information campaign is the most significant thing. Marketers appeal to this principle in advertising, and PR professionals use this approach in social campaigns.  Emotions help us connect with each other, and inspire us to do something. When we hear emotional stories or see them we want to share it with our friends immediately.

In conclusion, I would say that in his book, “Contagious” Jonah Berger clearly discusses and proves how social currency, triggers, and emotions can be appealing to an audience and make a product successful. Any business or organization who wants to have popularity in their campaigns should utilize these principles in Berger’s book.