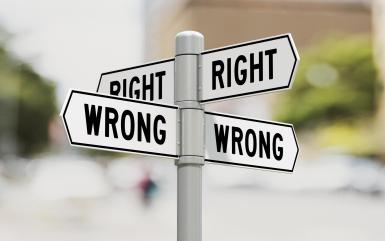 Is it possible to be neutral in judgments and attitudes when there is a political and armed conflict in your country?  Can you avoid being subjective? Is it ethical to make your opinion public when you work in communications and interact with the supporters of different ideologies? It is hard. However, there are situations when you cannot say it is nether black nor white, the truth is somewhere in the middle. No. The truth can be either black or white if the cost of your hesitations and being neutral is human lives.

I am a Russian-speaking person from Ukraine with half of my relatives living in Russia that has always been considered a good neighbor and brotherly nation. It has never been a problem to say I am neutral or positive in my attitudes to both countries. However, as soon as a political crisis broke out and people started to lose their lives on the East of my country, my positioning as a multicultural person with diverse background became an ethical problem to me.

I could not find solution to the question if I should change my native language, which I speak since my childhood, to Ukrainian – the one I know well but not intuitively. Sometimes very patriotic friends of mine question me in social media why I post in Russian. Because this is my language and it is has nothing to do with my political views. Hundreds of Russian-speaking people every day do for Ukraine so much contributing all their time and effort for the country development. Or should I treat some of my colleagues and just random acquaintances from Russia with suspect and negativity?  This is a constant internal conflict between my cultural background and political views.

Thousands of people in Ukraine faced this ethical problem and had to make the decision. Some of the celebrities and businesspersons who received revenue from both of the countries did not want to lose one of their sources and claimed that they are neutral or simply don’t care. But wait! Standing between two enemies it is impossible to be a friend of both. The life makes you choose and those who could not choose sometimes lost their credibility and respect from both sides.

The other aspect of moral dilemma is the question if you need to extrapolate political views to the level of personal communication with people from the country-aggressor. Some would say – no. As we are all humans and can’t be responsible for our country policy. Though every person is an ambassador of its home country and can eventually become an influencer, share his or her knowledge with the wide circle of people, disseminating your message throughout the whole community.

I made my choice back in 2014, when international law and critical thinking empowered me to make a right decision in the ethical problem of self-identification and let me stand on the ground of sovereignty and unity of Ukraine and respect to people of all languages, views and beliefs. I try to be objective and operate facts in the discussions with my opponents because only reliable data, love to your country and consistency in argumentation can lead to consensus and find not the grey “middle” but the truth.