Political Coverage in America: What worked, what went wrong, how to fix?

From 9/11 to 11/9, the time span is almost 15 years from one disrupting incident to another future determining event. Media as a most significant tool of making meanings, shaping perceptions, setting agenda for general public as well as for policy makers needs to be evaluated in this regard. There is a need to revisit what kind of role media played, which responsibilities media took during that period. Whether the role played by media was the need of the hour

and contributed to the public interest.

After 9/11, media continuously fed people with the feelings of insecurity for example media emphasized US-Afghan war under the themes of America under attack, America strikes back, war on terror etcetera which in turn contributed to create an environment of Jingoism and chauvinism, bias and prejudice, discrimination and hate, ethnicity and detestation within America. Although it was meant for people identified as the ‘other’ beyond U.S. boundaries, but we
are living in a global world where the boundaries are blurring. Whatever happens outside the boundaries also affects the inside phenomenon. The narratives of the ‘other’ changed people’s psyches and they sta 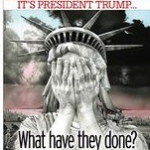 rted identifying enemies within the surroundings.

This election also draws attention to the democratic system and its loopholes, how the system can keep candidates with popular votes away. Media neither drew attention to this aspect of the system nor did it emphasize on policy matters. Media highlighted candidates for talking about making America great again, building the wall to keep checks on illegal immigration, denial to climate issues, scandalous and sensational news, private and personal issues. The factors that are responsible for creating these problems are not addressed. Real issues and policy matters were ignored. In the world of media, good news is no news, therefore; media nurtured on negativity. Investigative reporting was done but it could not initiate a serious debate rather served to entertain the audience. Media addressed issues in the more entertaining way and people consumed that information to strengthen the polarization rather than focusing on serious discussions.

As far as short terms effects of the media are concerned, the results are confronting the very idea of agenda-setting theory of media (proposed by McComb and Shaw) which holds that media has the great potential of shifting its agenda to public agenda thereby affecting policy agenda. The popular presence of social media that indicates production, consumption, response, reaction, recommendation, reconnection, resilience and risking factors associated to social media contributed to endorse existing perception and reinforcing opinions of cyber communities. Cyber communities which are established for their common interests, concerns, and values tend to circulate similar information that creates rigidity. Because of the inter-media agenda-setting, many issues of the social media tend to be translated to mainstream media agenda owing to the wide-ranging popularity of the content. As a result, non-issues become issues resulting in marginalizing the genuine issues. In this way, the power and grip of mainstream media is subverted.

If we evaluate American mainstream media coverage, we come to know that it wa

s much inclined towards Democrats as many opinion-editorial pages were openly supporting Hilary Clinton. Opinion polls were also indicating popular support for Democrats. Donald Trump most of the times got negative coverage in the media for example as racist, sexist, xenophobic. According to Pablo Boczkowski, “Hillary Clinton was endorsed by 229 dailies and 131 weeklies, including news organizations that historically have not been identified with either party and others clearly representing a conservative ideology normally linked to
Republican candidates. By contrast, Trump received the endorsement of 9 dailies and 4 weeklies. That’s a
27-to-1 difference.” With reference to social media, Pablo writes, “Trump

’s Facebook page accumulated 11.9 million likes; his Twitter account had 12.9 million followers. Clinton’s numbers were 7.8 million and 10.1 million, respectively.” The figures show that Trump was more popular on social media that contributed to his success.

The ideas of media conglomeration, inter-locking of the media ownership and increased concentration of the content that promotes a common worldview for its vested interests are not new to the American public. They took the opportunity to use social media as their platform which contributed to increased polarization in terms of race, gender, religion etc. It is concluded that we need to ponder on media’s long-term, cumulative, and emotional effects which cannot be undermined.

Pablo Boczkowski, “Has Election 2016 been a turning point for the influence of the news media?” posted on http://www.niemanlab.org/2016/11/has-election-2016-been-a-turning-point-for-the-influence-of-the-news-media/