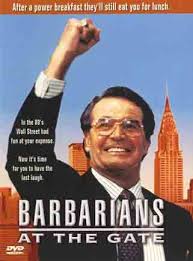 Movies are fun to watch… but writing a blog on a business movie isn’t exactly fun especially while holidaying in Hawaii!

But the movie ‘Barbarians at the Gate’ has an exciting plot – based on the RJR Nabisco deal – which in 1988 was the world’s largest leveraged buyout. The battle for gaining control of the company between Ross Johnson, the company’s CEO and Henry Kravis, the founder of a leading private equity firm raised up the final deal value to a whopping 25 billion dollars.

The movie is based on the book of the same name written by Wall Street Journal’s investigative journalists Bryan Burrough and John Helyar. 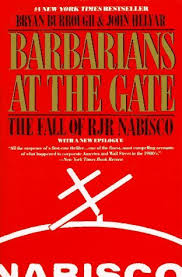 The story revolves around F. Ross Johnson, portrayed onscreen by James Garner, a millionaire CEO of RJR Nabisco. He is the main character of the story, who grew from being a newspaper delivery boy in Winipeg, Canada to being the CEO of a large American tobacco company. An industrious salesman who has climbed up the corporate ladder to the corner office. After learning that the company’s R&D has failed to yield an improved brand of cigarette, he decides to take over the company’s control in a leveraged buyout to save himself, his money and his ego. Others hear about Johnson’s proposed buyout – in which he will benefit the most and continue to yield the same powers. Johnson’s ego and want for more power are his downfall as more players jump in to compete for buying out the company. Here is a CEO who wants to buyout his under-performing company not for creating value for it and its stakeholders but for ensuring that he continues to enjoy all the money and perks like corporate jets, golf club memberships that come with his job.

However, despite being the top bidder for the buyout, the company’s CEO couldn’t wrestle its control. The entire movie has answers the question why?

The Board couldn’t trust him with the company. They chose to rather trust the pragmatic private equity guys – metaphorically called the Barbarians in the movie.

The Movie is all about how not to be Leader.

Listen to your team: Johnson ignored the warnings of his colleague before making bullish projections about the result of research on a new type of cigarette – increasing the expectation of the Wall Street. The person whom Johnson did not listen to was the man who broke the secret of his under-performing business to rival buyout firm KKR.

Take your team into confidence: Johnson didn’t take the company’s stakeholders (the employees and the board of directors) into confidence before deciding on buying out the company. A leader needs to trust his people and provide them enough reasons to trust him back. Trust becomes critical as one climbs up the management hierarchy since higher you go, the people whom you can trust and who trust you become lesser and lesser. Your strongest link becomes your weakest one during time of crisis.

Co-operating rather than competing: The idea of a buyout was given to Johnson by Henry Kravis, the owner of a leading private equity firm KKR. However, Johnson chooses to go ahead with buyout with another firm rather than KKR. This ensnares Kravis who makes sure that his firm succeeds to buyout Nabisco instead of Johnson.

Leadership is not battle of Egos: Eventually, the buyout battle turned out to be a battle of egos rather than about creating value for the company or its stakeholders. When ego takes over and rationality takes a backseat, the business decisions so made tend to be wrong.

Leader can’t be selfish: A leader can’t afford to be selfish – sooner or later people see through the greed and selfishness and the leadership is rejected or removed. Enjoying extravagant living and spending at the company’s expense without generating high performance for the company is not going to be acceptable to the company’s stakeholders.

Money can’t buy everything: Just because you are the highest bidder, it doesn’t ensure the deal is yours. There are elements in human spirit – which cannot be manipulated with the lure of money. Trust, respect and commitment are a few of them.

Play Fair: You can’t play unfair and expect to have the last laugh 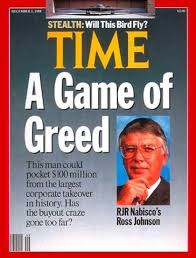