Freedom Writers is a movie about privilege, perspective, and persistence. Based on the true story, the movie centers around Erin Gruwell, a first time high school English teacher. Mrs. Gruwell decided to teach in Long Beach in the 1990’s shortly after the school district changed it’s integration policy. A school known for it’s bad reputation around the education of students of color, Mrs. Gruwell’s genuine passion for making a difference in the lives of these students, through reading and writing, united a classroom and forever changed the town.

Lesson no 1. Tolerance and understanding

Mrs. Gruwell was able to teach her students how to work through the trauma they had experienced in order to live, learn, and grow together despite their differences. She tried to show them that they had more similarities than differences, despite the racial tension that they all experienced. Many of the students had lost a friend or loved one to senseless violence. Many of them had been abused or molested. Many of them were victims of substance abuse. These shared experiences allowed the students to establish common ground in order to unite and attempt to create real positive change in their neighborhoods. 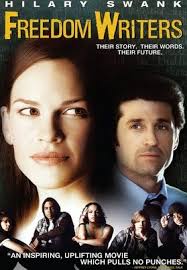 Modeling after her father’s teaching approach, Mrs. Gruwell developed a new understanding of what it meant to be the “perfect” teacher. She was dedicated to finding and showing how everyone was capable of living a life with meaning if given the chance and support. She put aside her private life, aiming to help her students believe in themselves. During the school year she undertook two different part-time jobs to raise money for the student’s trip to museums and show them how the Holocaust took many Jewish lives.

Lesson no 3. How empowerment can change lives

Mrs. Gruwell’s colleagues were unwilling to devote the time, energy, and attention to the students that would foster a positive, safe environment for them to not only tolerate their differences but to accept and even appreciate them. Once Mrs. Gruwell convinced her students of their self-worth, they began to see their potential. The students felt empowered to take academic and intellectual risks in the classroom. Perhaps more important, they felt empowered to befriend those whom they had previously dismissed as “the enemy.”

Lesson no 4. The importance of self-worth

Few of Mrs. Gruwell’s students had ever had someone believe in them, half of her battle was showing the students that they were not only capable but were worthy of receiving a good education. She showed them that they could successes their dreams and become first in family, in community, in neighborhood with degree. Everybody is somebody’s “hero” and greatness does not depend on the size of the person but the spirit within. Each life is important and worth documenting. Writing is a way to preserve your legacy.

View all posts by Marli Mayon →

2 Comments on “Writing: a tool utilized to overcome differences, understand others and develop leaders”