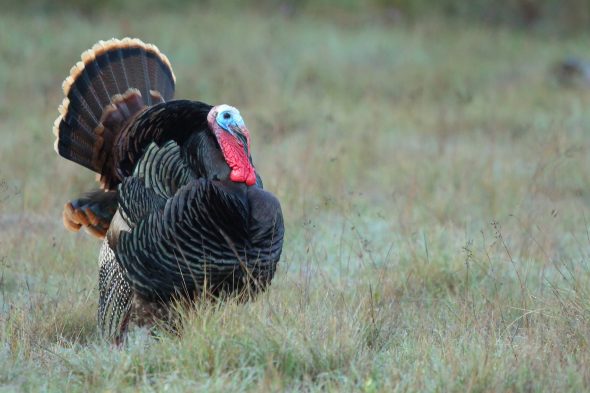 How I spent my time on Thanksgiving day.

It was around 10 o’clock when I got the missed call. I did not know who it was. About 30 minutes later, the same number rang me again. I answered the phone.

Hello, said the person on the other line. “It’s Larry’s here. Do you have a plan for today?”

“Yes sure,” I responded with excitement.

I was delighted that I would experience Thanksgiving in the U.S with the right family at the right time. I waited for Larry to pick me up.

We agreed that Larry, my colleague Holger’s Global Friend, would come and pick me up at my place.

Larry arrived at around 11:30, driving his new red car.

He then drove us to a shop where cooked turkey and other things, like stuffing for Thanksgiving, were sold to customers who did not have time to cook for themselves for the holiday. 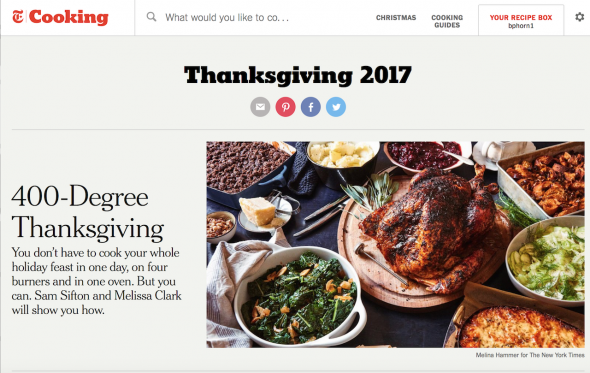 Screenshot of Thanksgiving meal on the New York Times website.

On the way, before we got to the shop, Annie, Larry’s wife, called him and asked what kind of Thanksgiving food we wanted. Larry and I decided that we would get turkey with stuffing and some coke. She told us to go home and she and her friends would bring food later.

We arrived at Larry’s home 10 minutes or so before his wife and their friends, a couple in their 50s. They bought boxes of Thanksgiving food. We put it on plates and heated them up before starting our very early dinner. At the table we talked about their friends who were supposed to cook Thanksgiving dinner but got sick.

They talked about their vacation plans next year, and I also shared with them the sad stories about what is happening in Cambodia at the moment. 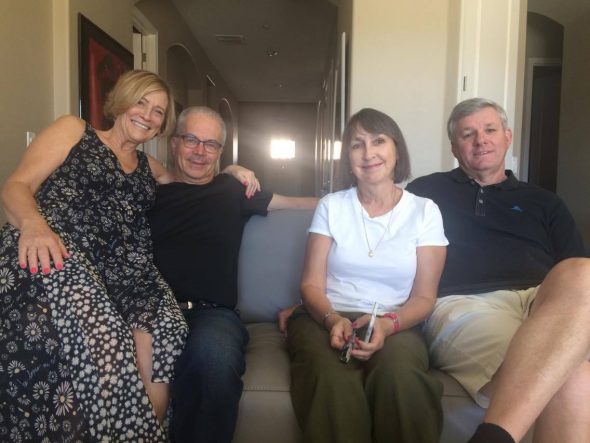 Larry, Annies and their friends post for a photon on Thanksgiving day this year. Photo by (Bopha Phorn)

After we finished out dinner, we had some pie. There was apple pie and another kind of pie with nuts in it. They all had their shares and I had a small piece because I am a small girl, from a small village.

After we finished our desert, Annie, brought two small boxes of cards for playing the games, Utter Nonsense and Reverse Charades.

Annie told us to get 5 or 6 cards. I was the one that read out the card so the rest could say them in the right accent. The person who does the best accent wins the game.

I was the first person to read the card; it said “Give Birth”. Their male friend decided to not play and say the words. Annie started saying the word out loud, making it sound like she was giving birth. Larry and their female friend followed suit.

We also played charades, where every one had to pick up a card that says different things and each of us had to act so that the rest could guess what our cards said.

I’ve got “high heel”, so I had to walk on tiptoe as I did not wear high heel. Annie and their friends guessed, tiptoe, walking,…etc. Larry came up with the right answer, high heel.

After the second game Annie brought out pieces of paper and she started asking us questions.

“What year was the celebration that is most commonly attributed as the Thanksgiving?” she said, reading her first question.

“Thanksgiving is the most favorite holiday as it is at the beginning of the holidays,” Annie explained to me while we were watching a Broadway performance on TV. One of the men in a group of ten performing on TV almost broke down while he was performing. We guessed he was too excited and too happy that he got the chance to perform live.

Annie told me that she always wanted to perform like one of those girls. She said she was the right heigh and weight. I could tell that Annie, who dressed in a nice elegant yet simple way, would fit the role well. Though she’s shit her 60s, her joyful spirit, her elegant figure and her beautiful face, with its constance smile and excitement, makes her look younger than her age.

Before 3pm, their friends said they had to go back home.

Larry asked us if we would like to go see a movie in a cinema in Scottsdale. We decided that we would do that. Larry and Annie decided and the film: Roman J Israel Esq, a story about a lawyer in Los Angeles who fought for better court system, staring Denzel Washington, Colin Farrwell, and Carmen Ejogo. The movie was depressing yet captivating. It finished at around 7 o’clock. We were talking about the movie before Annie drove me back to my apartment.

It was my first and my best Thanksgiving experience and memory. I hope I will celebrate Thanksgiving again next year.