It was the Wednesday movie in Crokite School, it was „Live from Baghdad“, and I couldn’t resist to make an exception. Now I have to cope with it, but let’s at least try to share some thoughts that might bring anything useful to anybody’s further thinking about wars.

I try to avoid war movies and you will surely understand why, as I was born and raised in the town called Sarajevo. The most friendly and cosmopolitan town you can imagine. Until the war happened. It just happened and I don’t care any more about any political or even journalistic explanation why. They fade before the fact that all the wonderful memories of my childhood are now just a picture-book in my head, that comes back only in dreams because I try never to think of it in reality.

But I can write sometimes. With the only reason: to try to stop other people doing what some people have done to me – to avoid things that I used to like most. Like fireworks. They always remind me the picture of the night sky crossed with lightening traces of missiles over my school, my faculty, my church, my home, the grave of my friend toy-maker shot by a snyper as a civilian near his home.

I am writing this right here and right now because I have seen too much of war these days on different srceens. It was discussed even last night at all newscasts over President Obama’s declaration of the end of yet another war.

I can’t stop crying again seeing the faces of all the people that had to be killed in that war, no matter if they are „our’s“ or „their’s“. And I am writing this for each individual human being who sees it all on TV and still thinks that war can be an option to resolve anything important for their real life. Because you simply start seeing the inadmissible quantity of absurdity of any war when it really happens to you. There is no movie or TV that can make you imagine how it really feels when you are in the middle of an empty streat and you hear the air allert and you know that you are nothing but an ant that can become just nothing the very next moment.

Imagine that your father is 70+ and has just bought a good new car for the rest of his life. And some day a guy with a big beard and a gun comes to his home, orders him to give over the keys and drives his car out of his garage. Imagine that your mother has a cat called Kiss and some day she has to leave it behind and run away because somebody is shooting through the windows and yells „go before I come over there“, and she runs away to join her husband who was hit by a snyper and carried away somewhere to the woods around the town. Imagine that your sister has a piano and after several years she finds out that some day all the pianos in your street were taken away in big trucks in an organized action of robbing just pianos on that day. Imagine that you had your own library that you had collected with love book by book… And the only thing you know is that it made a big fire one day when your home was burnt down after the last person had been chased away. 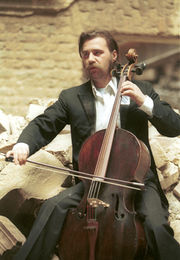 Vedran Smailovic, by coincidence ex-pupil of both my primary and music school, stayed there and played his cello every day in the town center no matter what.
The war is one of the most horrible human inventions. I know what I am saying. And now I am asking you to think together: is there just a hair-thin difference between „going to war“ and „war at your doorstep“? It lies in the ultimate right of a personal choice. The former can make you a hero, the latter necessarily first makes you a pray, a human animal, a pile of meat without any dignity. That is what does to you the real fear that somebody will come right now to your door with a gun and do to you any possible violence including killing you. And even think to do the right thing.

I know this post was too long, some may find it even controversial, but if it makes just one person refuse to find any excuse for any war in the future, my point is made.

6 Comments on “Live from Hell”