When I started watching the State of the Union on Tuesday, I thought I was going to focus on the social media – what was happening on Twitter, Facebook and Instagram.  But my plan changed when I started watching the live stream of President Obama’s speech on the White House’s website.  Last year, I watched the live stream on CNN’s website.  This year I googled “state of the union live stream” and clicked on the White House’s link.  I didn’t think much about which live stream I chose, but I’m glad that I stumbled upon this one.  Instead of a normal live stream, the White House website’s live stream was enhanced with graphics on the side.  The graphics went along with whatever President Obama was speaking about at the time.  If he was talking about healthcare, a graphic about health care went up.  If he was talking about jobs, a graphic about jobs was up. I thought this made the live stream more interesting for viewers and made you think about the topics more. 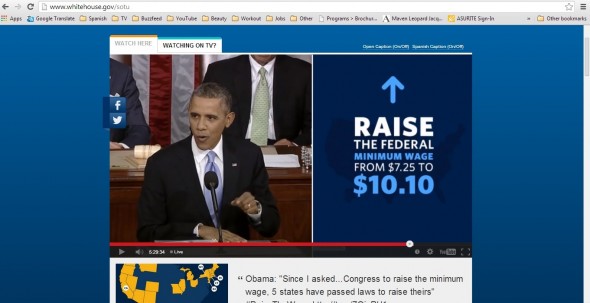 In addition to the graphics, the website also provided viewers with pre-written tweets.

The pre-written tweets, like the graphics, also went along with what the President was saying.  People could quote the President without having to type out what he was saying.  I thought this was a smart way for people to interact with the State of the Union.

For viewers watching on their television, they could access the same content (graphics and tweets) as the live stream viewers, just without the speech. 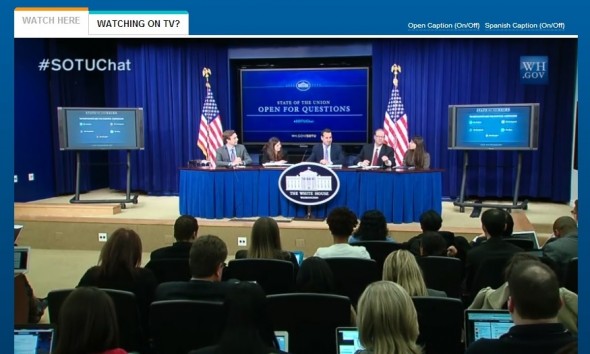 What I thought was most interesting about the White House website’s live stream was that there was a live Q&A broadcast, called Open for Questions: State of the Union Broadcast, right after President Obama’s speech ended. I had no idea this was happening, but I stayed tuned to find out what it was.  The Q&A had a panel of advisers from the White House answering audience member’s questions about or from the State of the Union and also questions submitted via Twitter, Facebook and Google+. It made the State of the Union more social and interactive than ever before. It was an interesting idea that I think will stick around.

View all posts by Darby Fitzgerald →

3 Comments on “The Social State of the Union”