One of my daily tasks when I work at The Arizona Republic is to create a photo gallery of the top AP photos that are taken each day.

I use my basic news judgement to select photos that I think are compelling, timely and relevant. But sometimes the Associated Press does not make this easy for me.

As the situation in Ukraine picks up, I found myself wondering, “what took so long?” Not that the issue in Ukraine was taking so long, but rather why it took so long for many American media organizations to bring the issue into the forefront of their newscasts and publications. 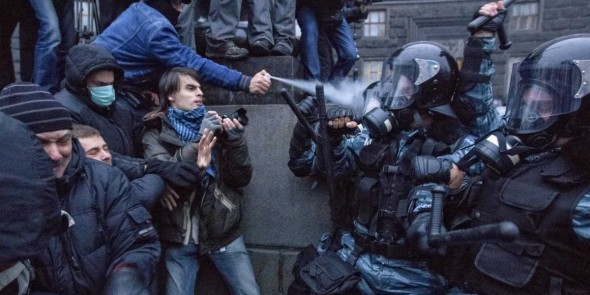 The issue is a grave one, but it is not new by any means. This specific conflict has been going on for months and today was the first day I saw it given significant coverage on CNN.

The photos of protests showed up in AP photos months ago, but as the Winter Olympics began, they were being overpowered by photos of bobsledders and ice skaters. It became increasingly difficult to select from a wide variety of topics simply because of the influx of sports photos.

Unfortunately this is not the only example of America focusing on lighter topics when the rest of the world is focusing on a serious news story.

I think that it is both journalists and the readers’ responsibility to demand serious news coverage of world events.

Is the rest of the world more knowledgeable regarding these events? Do American media not cover such events enough?

3 Comments on “America’s perspective and Ukraine”