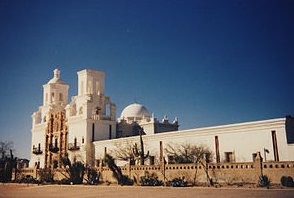 Two weeks ago two Humphrey cohorts and a group of international teachers joined forces to go on a trip full of adventure and learning. The day began very early when the bus picked us up. On the road, people were asleep at the beginning and I can say that I was very sleepy myself as I had just slept about three hours before the trip. Our first stop was Mission San Xavier del Bac, where we were hosted by representatives from the Tohono O’odam tribal nation. The sunlight was great to take pictures: the church, the little mountain -with the cross atop of it- beside the main structure and, of course, pictures of us!

Next in our trip we headed to the town of Nogales in Arizona, which is actually a city divided by the barrier built originally by Mexicans, according to our great guide and border patrol agent. The idea of the Mexicans was to prevent drunk cowboys from crossing the border to Mexico. Now the story has shuffled, as the United States government does not want illegal aliens crossing the border from Nogales in Mexico to Nogales in the United States and have access to their territory. Being from El Salvador, of course this is a very delicate topic for me and the people in my country, as many Salvadorans try to come to the United States illegaly through that point of access. The immigration issue is very complex, and I personally believe that barriers -of any kind- do not help building a community.

After we saw the barrier and took lots of pictures (again), we went to the Santa Cruz County Sheriff offices. Their representatives were amazing and the information we received about drug and trafficking, crime and how to maintain order, was very helpful. The community lives, according to them, very tranquilly. Another thing that was very intersting was that they said that Nogales is an important point of access to get goods, and mostly food, that is consumed by the people here in the United States during winter. 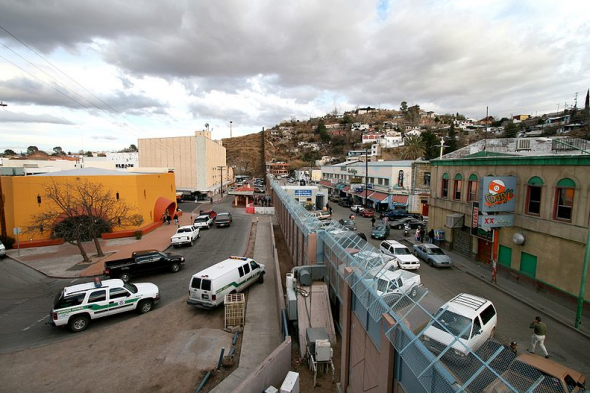 Next, we stopped at Wisdom’s Cafe for dinner. It was very kind from the owners to let us get in before the opening time in order to ensure that we were going to have service, as the place is very popular and gets crowded fast. The food was the average food advertised as mexican but cooked in the “american” way, for example tacos that are not, by far, the tacos you get in Mexico. Of course, taco can mean different things, and can be a dish presented in different ways. It is just that if you have had a taco from the streets of Mexico, you most likely not call a taco what they served there. At this point, if you are wondering what I ate, I had fajitas. I already knew what was a clean shot!

Alright, enough about food. We went back to Phoenix after dinner and had a lot of fun during our trip back: singing and joking almost all the way. Others, like me, sleeping a little bit because, as I had already mentioned before, did not get a good night sleep before the adventure.

We arrived safe and sound to the city and everything I have narrated ocurred on a Saturday. It is time to move to Monday, when the two Humphrey cohorts went to Tent City and later met Sheriff Joe Arpaio in state of the art facilities. The visit to Tent City was interesting. My initial perception was that the inmates were mostly from hispanic origin but I saw people from different etnic groups. They did not have the number of people by etnic group though. I asked for that information but did not get an answer. I guess they are not the ones who keep a record on that. The people that gave us the tour were very polite, helpful and respectful. They were open to all the questions we had -and there were many-.

Finally, there is not much to talk about Arpaio. My perception of him is of a person that has his own ideas and fights for them. I do not share his vision or methods, but I do understand that measures have to be taken in term of immigration. I hope he retires soon, as he is 82 and, let’s face it, some people go old and they start loosing their senses, like hearing for example. We told him tree times that we went to Tent City and he kept asking and, talking about questions, when I introduced myself and said I was from El Salvador, his reply was something like “El Salvador… how did you get here”. I replied “By plane”.