When Steven posed the question at the end of the Fitzarraldo presentation, I was inspired to write this post. The question was something to the effect of, do leaders lead for others or for their own self-interest? Of course you want to believe that leaders lead for others. But when I thought more about it, I realized that almost every leader I could think of had a personal stake in whatever objective they were trying to accomplish.

Here are some top leaders:

My conclusion is the leaders are usually the type of people who see a problem and see that it is not being addressed (at all, or well enough). I think most people just don’t see problems that have no effect on their own life, which is why there is always an element of self-interest in a person who choses to become a leader.

This self-interest is not necessarily a bad thing. In fact, if this list shows anything at all, it’s that these individuals were called to lead because of their stake in these issues—but then continued their fight because it was more important than just them. Like Uncle Ben said in Spider-Man, “With great power comes great responsibility.”

‘We went to war in order to be heard.’ — Subcomandante Marcos

P.S. Additionally, I would like to add that as I thought about other leaders, I remembered someone I learned about in my Politics of Mexico class:  Subcomandante Marcos from the EZLN Zapatistas in Mexico. If you haven’t heard about the Zapatistas, I’ll try to summarize them as best I can. They are a guerilla-military, anarchist group that fight for the indigenous of Mexico and against the racism that exists in Mexico. They declared war on Mexico after NAFTA was signed because one of the clauses said that the communal lands (ejidos) that the indigenous have used for years could be sold or redistributed. Subcomandante Marcos was the masked leader of the Zapatistas, but what was unique about him was that he was not an indigenous. He was a fair-skinned, highly educated individual from Mexico City (far from where the indigenous live), who was charismatic and well spoken in multiple languages. I would name him as an exception to leaders leading out of self-interest because his connection to the indigenous is pretty removed. I will have to think more about other leaders who have less of a personal stake in the cause they are fighting for, because it seems to me that it is a pretty rare occurrence. 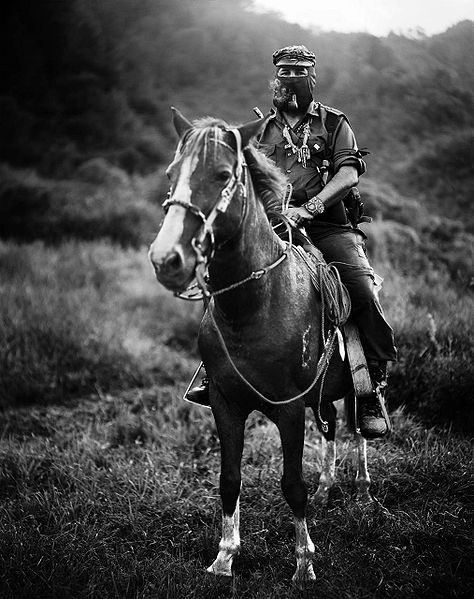