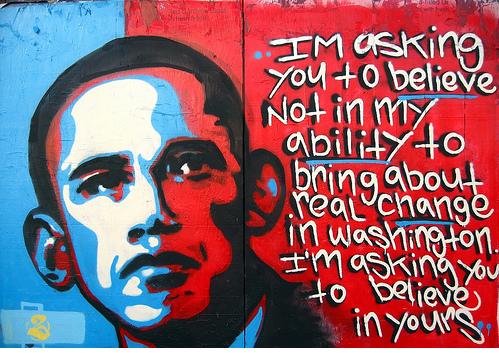 In May, 2011 the New Yorker‘s Ryan Lizza published a story in the magazine that chronicled the ongoing foreign policy debates within President Barack Obama’s administration. At the centre of the discussions was the question of how to define the so-called “Obama Doctrine.” Towards the end of the piece, Mr. Lizza quotes a White House adviser who characterised Mr. Obama’s foreign policy approach thus:

[He] described the President’s actions in Libya as “leading from behind.” That’s not a slogan designed for signs at the 2012 Democratic Convention, but it does accurately describe the balance that Obama now seems to be finding. It’s a different definition of leadership than America is known for, and it comes from two unspoken beliefs: that the relative power of the U.S. is declining, as rivals like China rise, and that the U.S. is reviled in many parts of the world…“It’s so at odds with the John Wayne expectation for what America is in the world,” the adviser said. “But it’s necessary for shepherding us through this phase.”

After the article’s publication, the phrase “leading from behind” became the focal point of a larger discussion about Mr. Obama’s leadership style. Some analysts were critical, suggesting that it was an approach to leadership that demonstrated weakness. One incredulous commentator was incensed at such thinking, arguing that Mr. Obama had “surrendered” and demonstrated a “failure” as a leader.

But what does “leading from behind” actually mean? Mr. Lizza, in a post-script to his article, points out that this concept is not new. He quotes Nelson Mandela, the late South African president and liberation leader, explaining it thus:

It is better to lead from behind and to put others in front, especially when you celebrate victory when nice things occur. You take the front line when there is danger. Then people will appreciate your leadership.

And in his autobiography, from which Mr. Lizza also quotes, Mr. Mandela goes a little further:

I always remember the regent’s axiom: a leader, he said, is like a shepherd. He stays behind the flock, letting the most nimble go out ahead, whereupon the others follow, not realizing that all along they are being directed from behind.

So, why are some analysts so critical of this style of leadership. And the use of the word style is important here. Because those who disapprove of the idea of “leading from behind” are not addressing the substance of the approach. They just do not like the “optics” of the concept.

Both Mr. Mandela and Mr. Obama appear to believe that in order to get the results (s)he wants, a leader has to make sure that everyone buys into the vision of what they are trying to achieve.  At the core of this idea seems to be the abdication of one’s ego for the good of the collective. It is also the kind of leadership that is more concerned about accomplishments of the group rather than the elevation of personal and individual glory. This kind of leadership, rooted in pragmatism and the desire to be inclusive and create a big tent where everyone can coalesce around a common vision, is what I believe true leadership is all about. It is the kind of leadership I can believe in.

(Photo: Graffiti art of Barack Obama with a quote from one of his speeches. Via the blog Art-Sci)

Omar is a Tanzanian journalist from Dar es Salaam, the country’s commercial capital.

Currently, he is on sabbatical as a Senior Consultant with africapractice, a pan-African strategy and communications firm with hubs across the continent. He advises companies investing in Tanzania and multinational non-profits working in the country on their political risks and strategic communications. Prior to that he was a Senior Producer for a BBC Swahili Service weekly radio news magazine show, ‘Haba na Haba’ (Little by Little) that looked at government policies and their impact on the citizenry on the ground.

He will be spending his Humphrey Year studying ways of creating an online, mobile first, multimedia platform that will chronicle the story of business in East Africa, in a manner that captures its complexity but also performs that all important watchdog role of holding the private sector accountable to make sure that it works for the benefit of everyone. He is also a basketball fanatic and loves the NBA.

2 Comments on ““Leading From Behind””