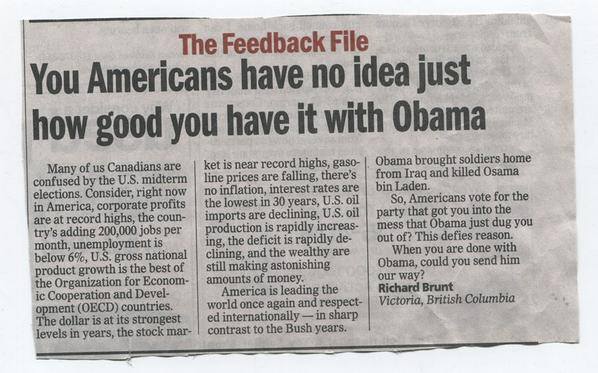 Last week, a letter to the editor that appeared in a Canadian newspaper made the rounds on Twitter with the writer expressing astonishment at US voters’ dissatisfaction with President Barack Obama. The gist of his argument was how could Americans vote for a “party that got you into the mess that Obama just got you out of?” This view was echoed by an Economist piece published a few days later:

Many outsiders will be baffled by the election results. Compared with other rich nations, America is in good shape, with a growing economy, booming stockmarket, falling unemployment and robust public finances, at least by European standards. Why, they wonder, is Mr Obama so disliked that Democrats in swing states asked him not to campaign for them?

As a foreigner in this great land, I have to confess, it surprises me too. Looking at the record, President Obama has achieved almost all of the “big things” he set out to do when he took office in 2009.  He has reformed healthcare, expanding coverage to millions of Americans. He passed the so-called stimulus which stopped what many feared would’ve been a near certain economic depression. He passed legislation to safe-guard the country from enduring another financial collapse that even some of its most vehement critics, such as Paul Krugman, concede is “working a lot better than anyone listening to the news media would imagine.” When it comes to the economy, unemployment is under 6%. Compare this to the European Union where the rate of the unemployed stands at 11%! GDP has grown over 2% for the past two years, the housing market is rebounding, the auto-industry is growing again and the medicaid expansion has helped less well-off Americans considerably in mitigating against high costs of healthcare. And before I forget, he also nominated two women to the Supreme Court, one of whom, the majestic Ms. Sonia Sotomayor, became the first ever Hispanic to make it to the bench.

On the environment, New York Magazine went so far as to call the man “the environmental President” due to his actions on fuel-efficiency standards and curbing carbon emissions. Additionally, the recently struck agreement with China to “commit to targets for cuts in their nations’ carbon emissions has fundamentally shifted the global politics of climate change,” according to The New York Times.

When it comes to national security he, for the most part, has fulfilled his pledge of withdrawing US troops in both Iraq and Afghanistan. Meanwhile, his strategy against Al-Qaeda has severely weakened the organisation. The killing of Osama bin Laden was a huge victory in this department. Overall, Mr. Obama’s decision to “pivot” to Asia, as a focus of his foreign policy, which analysts agree is an important recalibration, will better position the U.S. to counteract growing Chinese influence in the region.

By any standard, this would seem like the most consequential presidency of the modern era. Yet, Mr. Obama’s approval ratings are in the low 40s and his party has just been trounced at the polls.

In my mind two things may explain Mr. Obama’s troubles. First, for a politician who arrived at the national scene by virtue of his extraordinary eloquence has been surprisingly ineffectual at communicating his successes to the public. Mr. Obama admits it as much. Second, the Republican Party’s relentless opposition to this president ultimately created a perception that he was unable to lead. Incidentally, the GOP’s refusal to work with Mr. Obama is both ideological and tactical. In fact, according to Robert Draper’s book Do Not Ask What Good We Do: Inside the U.S. House of Representatives, immediately after Mr. Obama was elected, top Republican leaders met in Washington DC to plot against the newly sworn-in president. As per The Huffington Post‘s summary:

For several hours in the Caucus Room (a high-end D.C. establishment), the book says they plotted out ways to not just win back political power, but to also put the brakes on Obama’s legislative platform…”If you act like you’re the minority, you’re going to stay in the minority,” Draper quotes [then House Chief Deputy Republican Whip Kevin] McCarthy as saying. “We’ve gotta challenge them on every single bill and challenge them on every single campaign.”

But such is politics. Mr. Obama’s vision of governing, taking the long view instead of capitulating to the politics of the moment, has caused him problems politically. But as he said once, in one of the more inspiring speeches of his presidency, “we are not bound to win, but we are bound to be true.” That, to me, more than anything, captures the essence of President Barack Obama.