Fernanda Santos, Phoenix Bureau Chief for the illustrious New York Times, came into our seminar this week to discuss the importance of how reporters conduct interviews and the process of creating an informational news piece. She touched on a number of key points that, to my surprise, kept my attention during the core of the lecture. For myself, Santos continually reiterated her points to illustrate the idea that a news story shouldn’t be as simple as hearing an argument from one side, hearing an argument in contrast, and then writing a piece about that. It’s too simplistic of a template to use when creating news and explaining stories to people. “The most interesting opinions are the ones that are from those who claim to be ‘in between,’” explained Santos. Her thoughts on creating more buzz and continuing to gather information when conducting a news report were somewhat inspiring. She made me feel as though the overused model of only gathering two arguments for a news article is not as popular as I had once thought.

The fact that the midterm elections were to take place on the night after this lecture made her words all the more relevant. With attack ads and screaming voices going back and forth against each other, it makes it difficult to find accurate, useful information for one to make informed choices. For that reason, I believe that the mindset of those entering their first years of civic responsibilities in modern times is, more often than not, one of confusion at first. Instead of representing a collection of ideas that can be modified to work with the other side to create compromise, the last few years of gridlock has made neither the Republican nor the Democratic Party popular in any sense. The result of this has been a massive rise in the number of independent voters in our wonderful country. 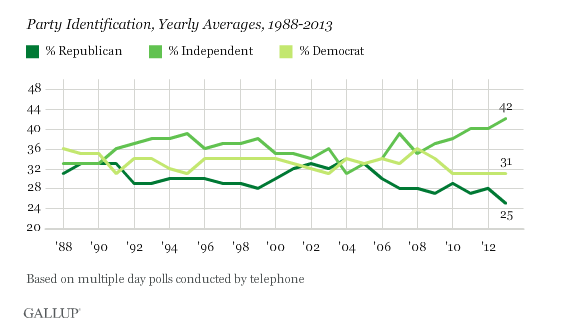 I want it to go down on record that I really believe this to be a good thing, in all honesty. Since arriving at Arizona State University in 2011, I have seen very little productivity come from Washington DC, much of that being due to the recent rise in tension between the two dominant parties. Continuing to funnel in more of the same will unlikely lead to anything but the same result, so a bigger third party does make sense. The reason that I’m most excited and optimistic about a rise in Independent voters is the quality of interviews that will become available for news stories. Independent voters will have much less of a reason to side with party politics when giving their opinion, creating more intricate thoughts and better voices for news stories. Columbia University has done well enough to lay out the guidelines on how to conduct quality interviews and, under these guidelines and with quality interview subjects, there’s no reason to think that news might just start to become more useful instead of the “same old same.”

2 Comments on “Quality Interviewing and Independents”