What journalists cannot control about voter turnout
A Nov. 6, 2014 article by Sam Fullwood III for the Center for American Progress titled “Race and Beyond: Why Young, Minority, and Low-Income Citizens Don’t Vote” discusses a few different theories about why voters don’t show up on election day.

The aforementioned article diligently references political scientists who study this topic, each with unique theories about why voters don’t turn out on election day. For example, it tells of how James Campbell of Georgia University suggested in a 1987 scholarly article that midterm elections lack a “wow” factor and “generally only political partisans bother to vote.” 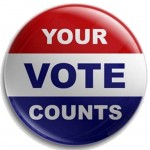 Furthermore, the Pew Research Center for the People and the Press found that 6 in 10 voting age adults would not show up to vote in midterm elections – and the worst part is:  many of the groups that don’t show up are underrepresented to begin with.

According to an ABC15 Arizona news article, 500,000 early ballots collected in the 2014 midterm election only accounted for about 47 or 48 percent response. This was a disappointingly low percentage at the time this was counted early Tuesday, Nov. 4, 2014 in Arizona. Maricopa County Recorder Helen Purcell told ABC15 she was hopeful for a 50 percent turnout on voting day, presuming the day goes smoothly and elicits high voter turnout. So what does bring the people to the polls?

What journalists can control about voter turnout
Journalists cannot control anyone but themselves. When it comes to increasing citizen turnout, the best assistance journalists can provide is great reporting and a bit of promotion. Reporters can tell great stories about a wide variety of issues, and citizens can “turn out” to take their stance accordingly.

Fernanda Santos, New York Times Phoenix Bureau Chief is a fantastic example of a reporter who serves to inform a community about issues before an election so that constituents not only show up to vote, but also make more informed voting decisions when they do. She recommends including relatable content in all stories so that even national audiences feel compelled to follow local stories. Santos is exemplary of the power of promoting civic engagement through quality reporting and storytelling.

José Luis Dader of Spain studies the affect of political journalism in contemporary society. He recognizes the power of groups of likeminded people gathering together around topics, and he addresses the power of social media in political events in society. His research supports the necessity for promotion of civic engagement, political topics and inspiration to get citizens to engage and vote.

Inspiring voter turnout
Speaking of inspiration for people to vote… here is a very contemporary way voter advocates are reaching a younger target audience. This video uses a pop culture icon, Lil Jon and his iconic song to inspire the youth to “turn out” at the polls on election day. This video supported a campaign by a nonpartisan group called Rock the Vote, which streamlined promotions using the hashtag #TurnOutForWhat, a spinoff of the song’s title, “Turn Down for What” by Lil Jon.