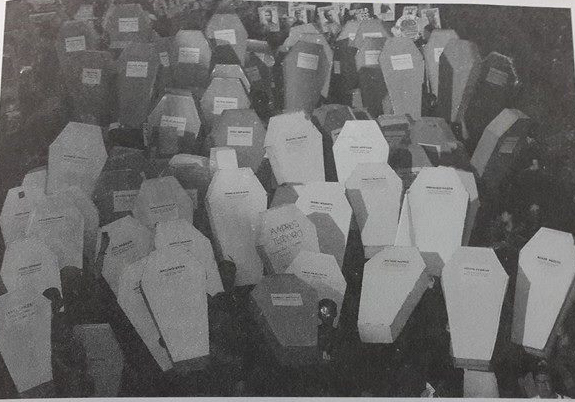 This Associated Press photo of mock coffins that Filipino journalists and activists piled in Manila during a demonstration over the 2009 killing of 32 journalists and media workers, features on page 163 of the Committee to Protect Journalists’ Attacks on the Press 2014 report.

It’s a ghoulish account. My eyes welled with tears and I felt a heavy lump in my throat, reading about the wanton slaughter of journalists and prosecution witnesses in the Philippines and Pakistan.

Elisabeth Witchel, one of 20 co-authors of the 2014 Committee to Protect Journalists or CPJ’s annual “Attacks on the Press” report, catches a reader unprepared with the content of her frightening chapter titled: When journalists are killed, witnesses may be next.

The use of the verb may, which expresses a possibility rather than certainty, is inapt, if not cowardly, in headlining a narrative that drips with blood from page-to-page.

“Haider [Ali] had identified four out of five suspects in police custody accused of carrying out the murder of Wali Khan Babar, a well-known television news presenter for Geo TV who was assassinated on his way home from work on January 13, 2011,” she writes.

On November 11, 2012, less than 48 hours before he took the prosecutor’s witness stand, an unknown gunman shot Haider just outside his house. Haider was the fifth witness brutally killed in Babar’s case before testifying in court. 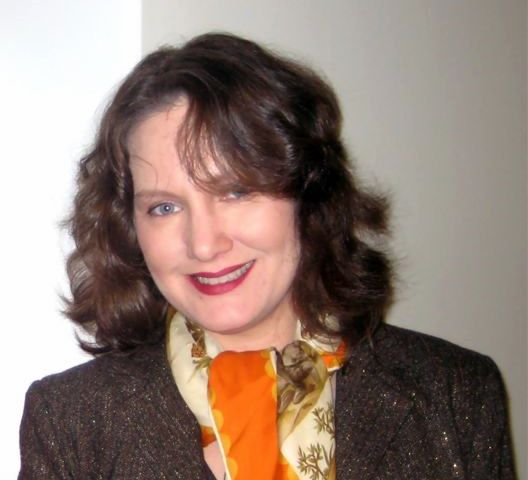 Elisabeth Witchel authored the chapter titled: When journalists are killed, witnesses may be next. She initiated CPJ’s Global Campaign Against Impunity program. Photo Credit: CPJ website.

These killings occur and the cause of justice subverted, according to Elisabeth (above), because masterminds “wield such immense power and influence that they are able to manipulate justice through corruption, violence, and fear … the risks [for witness] are immense, and many pay dearly.” (Pp164; 165)
For instance, preliminary inquiries showed Geo TV’s Wali killers belonged to the Muttahida Quami Movement, a political party that is a lynchpin of Pakistan’s polity; dominating police and government while running an efficient illicit armed wing.

The calamitous episodes have no example more chilling than the 2009 killing on an opposition candidate’s campaign trail of 32 journalists, among 58 victims, in Philippines’ Maguindanao province ambush. The powerful and wealthy Ampatuan family, allied with the then President Gloria Arroyo, was blamed for masterminding the deadly trap. Not even the anger of and push for accountability by world leaders could ensure justice!

This page 165 quote on macabre action by a militia group shows the surreal danger to journalists in some countries. Photo credit: Tabu Butagira

Suwaib Upham was one of the attackers of these 58 victims (in the above quote) in 2009; he confessed and was turned into a prosecution witness. Unknown assailants shot him dead on June 14, 2010. Two years later, in May 2012, another witness, Esmael Amil Enog, was gruesomely killed and his body “hacked to pieces and stuffed into a bag” (page 166).

By this time, it was evident the Philippines’ state-sanctioned witness protection scheme was not only flawed but also heavily infiltrated – if not run – by criminal elements. As Elizabeth writes, prosecutors basing on a tip that Enog had provided before his death raced to secure Alijol Ampatuan as a substitute key state witness, but were stunned on arrival to only find his dead body!

Because forensic investigations in both the Philippines and Pakistan, like in most developing countries, are often sub-standard, either due to incompetent detectives or official complicity, the disappearances of witnesses means securing convictions in few of the cases that go to trial remains a mirage.

Prosecutors, defense attorneys and relatives of victims are also targeted for elimination or threatened, making sharing of information on the privatized and contracted hit men suicidal.

Although Elisabeth covers only two countries, these excesses against media practitioners are widespread globally, manifesting in different forms.

The CPJ, an independent nonprofit American organization, which promotes press freedom says some 348 journalists, whose job in my view should not be as risky as battlefront troops, were killed worldwide in the past decade.