Since she won the Nobel Peace Prize in 1991, Aung San Suu Kyi has been dubbed as the  “goddess of democracy” and “Nelson Mandela of the East”. Her life symbolizes the struggle of a reluctant politician against the  relentlessly repressive and anti-democracy  Junta Government of Myanmar. 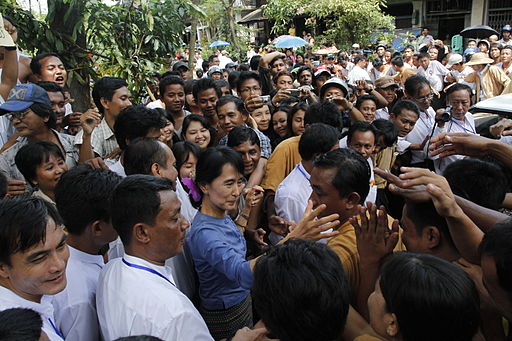 Aung San Suu Kyi greeting supporters from Bago State on 14 August 2011. This is her first political trip to Bago since being released from house arrest back in November 2010. (Photo By Htoo Tay Zar under CC BY-SA 3.0 (http://creativecommons.org/licenses/by-sa/3.0)

Suu Kyi lived to fulfill the unfinished agenda of  Aung San, her father, who  was instrumental in securing Burma’s  (now Myanmar) independence from Great Britain. He raised the “Burmese Independence Army” in 1942 which later became a major weapon in the  country’s struggle for independence.  He signed an agreement with the British prime minister Clement Attlee for a complete independence from Great Britain by January 1948. But political rivalry with the communists resulted in his assassination in July 1947.

If Suu Kyi  got ambition from her father, she got a very strong sense of duty from her mother. Her mother, Foreign affairs official of Burma’s Government was a good role model.  Suu Kyi attended schools in Burma until 1960 when her mother was appointed an ambassador to India. Learning foreign languages and having exposure to global politics formed her vision on the development of her country.

She met Michael Aris, her future husband, at the University of Oxford where she had gone for her post graduate studies. For the next sixteen years after their marriage, Suu Kyi was  happy being a housewife and a mother of two children. In 1988, she came to Myanmar for nursing her mother who was recuperating from a heart attack at a hospital. The news of her homecoming spread like a wildfire among late Aung San’s supporters. They wanted her to join their struggles against U Ne Win,  the repressive military ruler of Myanmar.  What she would not have anticipated is that this event would change her life and the political course of Myanmar forever.

In 1989, she was put under a house arrest by the Junta Government. But her popularity had soared to such heights that her party – National League for Democracy (NLD) won 82 percent votes in the 1990 parliamentary elections.  The election results were ignored by the Junta government and Suu Kyi  remained under house arrest. In 1991, her Nobel peace prize was received by Michael Aris, her husband, along with Alexander and Kim Aris, the two sons of the couple. Due to the international pressure, Suu Kyi  was released set free from house arrest in July 1995.  In between 1999 and  2010  Aung San Suu Kyi  was put under house arrest for eight and half years.

Amid all these political turmoils, Suu Kyi’s personal struggles never ended. Having lost her father at the age of two, Michael Aris was an emotional anchor to Suu Kyi in the bad times. During Suu Kyi’s house arrest, he continued to take care of the couple’s two sons in England. But a personal tragedy unfolded when Michael was diagnosed with terminal cancer in 1998. Michael  applied for Visa to Myanmar for thirty times, to say a final goodbye to her wife. Every time, the  government officials rejected her request to enter Myanmar. Michael Aris finally died at London in early 1999. Suu Kyi never got to see her husband, knowing that she would not be able to come back, once she left the country.

International pressure forced Myanmar government  to agree to a Parliamentary election in 2010. The government, however, tried everything to keep Suu Kyi away from elections. It passed constitutional law prohibiting anybody who married to a foreign national from running for elections. As  Suu Kyi was married to a Britisher, her party – National League for Democracy (NLD), refused to participate in elections till these laws were taken back.

All her struggle has finally resulted in the restoration of a healthy democracy in Myanmar. In the parliamentary elections of 2015, NLD came to power with a massive majority.   In April 2016, a position of state counselor was created to allow Suu Kyi play her a greater role in the country’s affairs. The world is looking forward to changes in Constitutional provisions of Myanmar, which would allow Aung San Suu Kyi to become the President of Myanmar, a place that she righteously deserves in the history of this country.