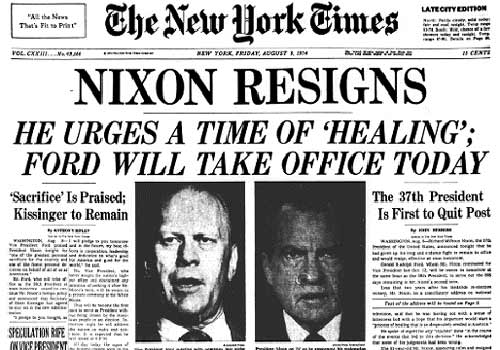 To preface this post I need to say that unlike my journalist colleagues in the Humphrey Seminar I come from a field where ethics is far more murky and subjective. Contrary to news organizations most political organizations have no published ethical codes, however they often have guiding values and mission statements.

Because my current career trajectory has me looking at researching, writing, and promoting legislative issues for NGO’s like the Economic Policy Institute of the Center for American Progress this is the area I will focus on. But it is important to note that I could just as easily be working on some congressman’s political team, or even within a government agency like the state department in a few years time.

When I scroll through the websites of  NGO’s I can see myself working for it simply rare to find an established code of ethics. However, as I previously mentioned goals, mission statements, and “about us” pages are very common. For example the “Our Mission” section from Center for International Policy reads:

The Center for International Policy promotes cooperation, transparency and accountability in global relations. Through research and advocacy, our programs address the most urgent threats to our planet: war, corruption, inequality and climate change.

CIP’s scholars, journalists, activists and former government officials provide a unique mixture of access to high-level officials, issue-area expertise, media savvy and strategic vision. We work to inform the public and decision makers in the United States and in international organizations on policies to make the world more just, peaceful and sustainable.

Sections like this are pretty useful in explaining an organizations goals and values,  but fall far short of being a formal code of ethics. My findings so far support the idea that ethics in politics are generally more fluid and value based, rather than legal and rigid. This is not to say that there aren’t hard written limits, governmental or organizational, in politics. Just that they are less important than in other fields.

For the most part the court of public opinion determines what is and what isn’t ethical in politics. Many behaviors in the political sphere can be morally questionable, but not illegal. Lobbying, political fundraising, and campaign finance, especially in the post-Citizen’s United era all have their dark sides. While it may not be scrupulous for a politician to accept donations or information from certain groups, or be supported by super-PACs, in the end it is the public’s responsibility to vote these people out of office. While I recognize how difficult this can be with the current state of our two party system, this is a highly nuanced conversation that would require a lengthy post of its own.

In the 2016 US presidential elections many of the ethical norms in politics have come under fire. While a large part of this comes from shady campaign financing in elections across the country, the most prominent breaches of normal political ethics are the statements and rhetoric of Donald Trump. Trumps has vowed to wage “war on political correctness”, attacked people based solely on religion and ethnicity, and generally broken the norms of ethical behavior.

And yet all of this relates back to public opinion. Is Trump’s behavior truly unethical in a political context if so many people support it? Is it politically okay to insult and demean others as long as no legal boundaries are crossed?