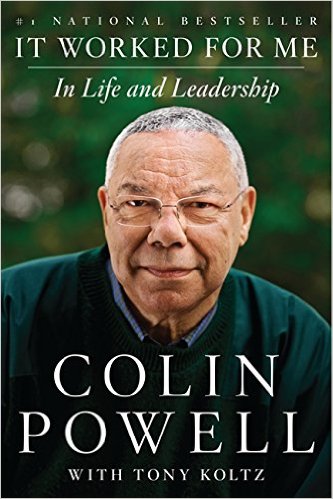 In his book, “It Worked for Me: In Life and Leadership,” Colin Powell provides fascinating insights into life and leadership. He discusses some of his reflections on leadership in public service from the beginning of army life to the most crucial moments of his career.

Powell was born in New York in 1937. The son of two Jamaican immigrants, he came from humble means. But Powell says in his book that his life changed forever when he joined the Reserve Officer Training Corps, or ROTC, while attending the City University of New York. Powell quips that had he not joined the army, he might have ended up working as a bus driver one day. But through persistence effort and a passion for military life, Powell won a commission in the U.S. Army after college. Powell not only won a commission, but quickly rose through the ranks through continued education and effort.

But perhaps just as importantly, Powell continued to succeed in the military and rise through the ranks because he constantly evaluated what constituted good leadership. While serving in South Korea, Powell was mentored by General Henry Emerson. Powell writes that genuine compassion and care for his soldiers inspired him. Conversely, Powell believed his experiences in the Vietnam War provided countless examples of poor leadership. He believed that operational goals were often unclear, which put soldiers at risk.

These lessons from early on his career would stick with Powell throughout his life in public service, from his time as Chairman of the Joint Chiefs of Staff to Secretary of State of the United States of America.

Just before assuming his role as Chairman of the Joint Chiefs of Staff, Powell published a list of 13 principles of leadership, which are as follows:

When Powell assumed the chairmanship and later became the U.S. Secretary of State, he applied these principles throughout his tenure.

As Chairman of the Joint Chiefs of Staff, Powell oversaw coalition operations during the Persian Gulf War or Operation Desert Storm. He pursued strategies that minimized harm to American troops and ensured the highest likelihood of success, often confronting ill-equipped Iraqi forces with overwhelming attacks.

Powell’s insistence on protecting the lives of his troops stemmed from his time as just another ROTC recruit, but he applied these lessons in the State Department as well. Powell describes how while serving as Secretary of State, he went out of his way to get to know the names of the janitors at the State Department Headquarters in Washington D.C. He even tried to befriend them, insofar as time allowed. Powell was not simply being a nice guy by reaching out to these men and women. Powell believed that for a leader to truly inspire those around him, a leader needed to show respect for each team member’s participation in the organizational mission. Powell wanted to show appreciation for the contributions of every member of the team to the overarching mission, no matter how small it may be.

Powell goes on to write that this incident not only shows effective leadership, but also reminds leaders to remain humble. Often times, leaders may see themselves as carrying greater weight in an organization than all others, or even the whole organization. But when compared to the entire bureaucracy of the United States Department of State or the United States Army, Colin Powell himself is still only a very small piece of a very large puzzle. Powell recognized this and always remained humble throughout this time as a public servant.

Powell’s emphasis on humility and appreciation of the value of teamwork still stands as a model for public service, and indeed for all leaders. Powell understood that just as no man is an island, so too is no leader. Leaders serve as the heads of organizations, but are still simply a part of the whole. Appreciating the contributions of all the parts to the whole makes the organization run better, which is the overarching goal. Powell understood this, and even when no one was watching, went above and beyond to ensure organizational success.