Make people believe in future with a higher purpose, act out, and empower them.

A leader is one who knows the way, goes the way, and shows the way (Maxwell). Leadership is not a solo journey, it needs people to bring a positive change. But the change process starts with the self. Gandhi says that be the change you want to see around. People around me belong to three great generations: millennials, generation X, and baby boomers.

In my professional life, as a teacher, I use to interact with all the three generations: executives mostly are Boomers, colleagues mostly are Generation X, and students’ majority is Millennials. It is said that Boomers live to work as compared to Generation X and Millennials who work to live. I am Generation X, an intercessor, therefore can understand the predecessors and followers. Millennials are more civically engaged and much inspired for social justice.

As a leader, I personally believe that every person is unique and valuable, therefore,

Each human being is born with great potential, unique capabilities and must be respected. As Quran says, “Present not an appearance of disdain to people, nor strut proudly in the earth. Allah loves not the arrogant boaster” (Luqman Chapter 31: verse, 18). The same idea is also endorsed by a Hadith (saying of Prophet Mohammad peace be upon him). He says, “Allah has revealed to me that you must be humble towards one another” (Ibn-e-Majah). Why there is much emphasis on treating people kindly because people can influence positively as well as negatively. People have the ability to bring the best and the worst in others. Great leaders always bring the best in people by giving them respect and value. Let me quote a story from Martin’s book Leading like Madiba: Leadership Lessons From Nelson Mandela. The story is about a successful businessman named Peter. He was invited by the President Nelson Mandela for a breakfast at his home. Peter dressed in his best clothes and asked Dumi, his company driver, to take him to President’s home. When Peter arrived there, he found Mr. Mandela waiting in the parking area which made Peter extremely delighted and humbled. “He warmly greeted the driver and me. He then gestured that we enter the house. However, in the traditional way of corporate behavior and protocol, the driver retreated quietly and remained in the car. Mr. Mandela invited me to the breakfast table. Just before we started eating, my host seemed to miss something. He asked, “Peter, I thought there were two of you?” I responded, “No, sir. I came alone.” “What about the other gentleman?” he insisted, and I replied, “No, sir. That one is just a driver. He will wait in the car.” At that point Mr. Mandela stood up and went out to where the driver was. He introduced himself to the driver and asked him to join us for breakfast. Mr. Mandela then walked to the kitchen and said, “Dumi is joining us for breakfast. Can we have another plate, please?”

Peter never forgot what Mandela did. And neither did Dumi. Peter went on to say, “When leaders learn to see the personalities that lie behind these seemingly humble titles [drivers, guards, and servants], the people in those jobs do not just feel appreciated, they discover and walk into new horizons of their lives. They become great performers at what they do. They find personal fulfillment.” (cited in 5 Levels of Leadership by John C. Maxwell, pp. 91-92).

My leadership plan for my students, who are a great majority of millennials, is to inspire them to bring the change they want to see around. Inspiration does not happen by talk but by practice. That’s what I learned from two great leaders: Nelson Mandela and Aung San Sui Kyi. Both inspired people by their practice of what they believed in. I believe in giving respect and value to every student which can give them confidence and motivate them to be creative and bring new and brightest ideas, and courage to share their ideas with the fellows because of the respect and value they have for themselves and for others. 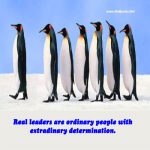 My leadership plan for my colleagues is to be a team of enthusiastic, committed, and devoted people and I would love to learn from them and would love to share my knowledge and skills with them so as to synergize. To achieve this goal, me and my colleague Dr. Bushra founded a forum back in 2010 for the

faculty members of five departments to empower them with new knowledge, abilities, and skills. It was highly appreciated for the cause and contributed as well. I would love to revive that. It is said that seek knowledge to understand so as to be understood. For executives, my plan is to know their vision and wisdom. Maxwell’s book 5 Levels of Leadership tells that leaders at 5th level always develop leaders and create a ripple effect.

I would like to conclude by quoting Mack, who is a motivational speaker, co-founder of topstoryleadership.com, and author of 15 books on leadership. He says about the application of  leadership principles as, “We develop others by helping them grow, transform, and achieve greater results. First within themselves; then, with and through others from wherever they are.” I believe everyone is a leader as far as one can influence those above, below, and beside them.