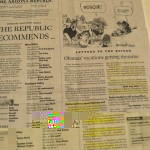 I am an exuberant man at the end of this weekend. It took me only three weeks to get my first contribution published in a US newspaper. The Arizona Republic published my letter to the editor which I had jotted down in response to a news report published in the paper about the current floods in Pakistan.

What actually enticed me to dash off the letter were the condescending views expressed by some of the readers vis-à-vis American assistance to Pakistan in the wake of the catastrophic floods. They argued that the US government  should not assist the flood victims in Pakistan and this task, they ridiculously insinuated, should be given to bin Landin to fulfill.

In response I, while acknowledging the corrupt nature of the government of Pakistan, pleaded that the innocent women and children must not be “punished” only because of the sins of the politicians.
“ It is not time to play politics,” I wrote. 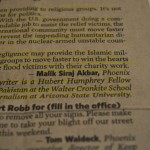 My letter to the editor did not end the controversy but, on the contrary, further flared the entire issue up to a great extent. More readers commented and expressed their points of view. A thumping majority of people were deadly opposed to any kind of assistance provided to Pakistani flood survivors.

For a moment, I was utterly flabbergasted over the unanticipated indifferent behavior of some of the American readers. I wondered how they gathered the spunk to publicly say that the flood victims should die of starvation because their politicians sinned regularly.

It was end of imagination.

It was the inception of hope. 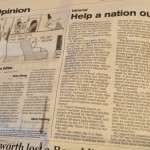 I immediately saw a bacon of long-term hope the next day. The State Press, a newspaper brought out by ASU students, did not only editorialize Pakistan’s worst floods but also passionately enjoined all the ASU students and faculty members to “Help a nation out”.
This was indeed the younger America speaking. I was deeply touched by State Press editorial which dramatically changed my perceptions about the American youth. I am ecstatic to assume that the younger Americans are more interested in knowing about the rest of the world and bridging gaps between different cultures. Previously, I had assumed the American youth perhaps took no interest at all in the developments, either positive or negative, taking place across the world. 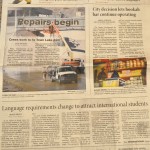 Thus, the next day I sat before Indra ekmanis, the young Managing Editor of the State Press, at their newsroom in the basement of the Matthews Center in Tempe Campus. Along with another colleague of hers, the American editor of a campus newspaper seemed very jubilant to have a foreign journalist among them.
They said they were “very very interested” to know about my county and culture. They were so different from the hateful commentators I had encountered on the website of the Arizona Republic.
“ Is it possible for you to share your knowledge and experiences with our team of journalists and editors?” asked Indra, “ We are in fact a team of young and inexperienced people. Your  willingness to speak about your country’s media system will remarkably help us  understand the system there.”
I gleefully replied and assured that I would always be pleased to meet their team members to share my knowledge about the media, history, culture and government of Pakistan and its neighboring countries.
On my way back to the Cronkite School of Journalism, I kept on thinking and whispered to myself , “ boy, first impression (which I had from the Arizona Republic commentators) is not always the last impression.”