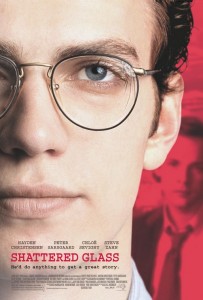 Shattered Glass was the best journalism-related movie I have seen since watching All the President’s Men. It was a wonderful Wednesday Night Movie at the First Amendment Forum which was enlivened by a thought-provoking discussion that Professor Jody Brannon supervised.

The movie is about a young reporter, Stephen Glass, at The New Republic magazine who fabricates his stories. He mentions fake and, in some cases, nonexistent sources in his reports.Too popular among his staff members, Stephen gets caught after one of his stories about a hacker is investigated because of its shadowy sources. The young reporter descends into disgrace after it’s unearthed that all his sources were fabricated.

As a result, the young reporter is suspended from his job. At the end of the movie, we learn that he fabricated at least twenty-seven stories out of forty-one in previous editions of the magazine before being caught.

The movie highlighted a few very important aspects of journalism.

My personal opinion, which I shared in the post-movie discussion, was that a reporter must always discuss his story idea and share most, if not all, of the sources with the editor. You cannot solely blame a reporter after the publication of a story when it turns out that he cooked the story. Mutual trust between the reporter and the editor is an essential element of good journalism. The reason due to which Glass fabricated stories was because his editors did not regularly coordinate with him to fact-check his sources when he was doing stories.

I wonder for how long he would continue to do this criminal job as a reporter if editor Michael kelly were not replaced with Charles Lane, Kelly’s successor.

It was funny when he tried to convince Kelly that he was being punished only because of his loyalty with his former boss. I admire Kelly for being a professional editor who does not get flattered by Glass’s remarks. Instead, he reminds Glass of one such stories he had done about the Republican convention. In that story, Glass had mentioned the minibars in a hotel which did not in fact have minibars but small fridge in its rooms.

It has become much easier to fact-check stories now in the age of Googlization. Nonetheless, journalistic integrity and credibility is, I believe,  just like virginity. You lose it once and forever.