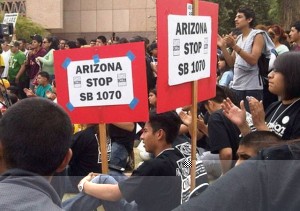 Human sufferings are similar throughout the world. It is not as if some people suffer more in one part of the world because of one issue and the others confronted with a similar problem suffer less elsewhere. We all, who come to America from other countries, keep endlessly convincing the folks back home that America is not all what we see in Hollywood movies.

America is indeed the world’s sole super power. Yet, it is still not the Utopian land where people remain oblivious to the connotation of pain, suffering, hunger and torture.

I found my today’s interaction at the Cronkite School with the team of 2010 News 21 Knight fellows very insightful and thought-provoking. We spoke to Cronkite students who reported on immigrant women’s issues.

” It is the economic reasons that drive many to illegally cross the border,” said Lauren Gambino, who worked in the project, “a person who earns $6 a day in Mexico can’t resist earning $6 per hour a few miles away in another country.”