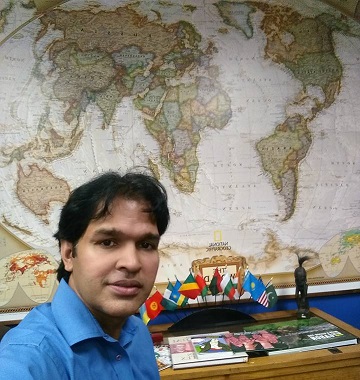 EARTH PLANET: Canadian scholar Marshal McLuhan in his books ‘The Gutenberg Galaxy: The Making of   Typographic Man (1962) and Understanding Media (1964), discussed how the world has been contracted into a village due to the spread of technology and speedy information movement from one side of the globe to the other. No doubt technology has make this world small and familiar to everyone who is adept with ICTs (information and communication channels). He called the world as a “Global Village”.

My father has friends mostly in our native place Lahore, Pakistan and in some other cities where he used to visit people frequently or vice versa. However, I have friends in India, US, China, Nepal, Brazil, Saudi Arabia, Turkey, United Arab Emirates and other countries. I talk to them almost on a daily basis or whenever I or they desire to.

This is because of social media and internet revolution. It has changed the way we connect to the people of diversified cultures, countries and religions. Facebook, Twitter, LinkedIn, Instagram, Myspace are among the fastest growing SNS. I just post a picture with a few words description and there it goes to world and becomes global. People start to click like or comment.

Yes, this is the Global Me! I do want to be a global personal brand.  I am using Internet social media websites which connect me to the world. I am telling the world, who I am, what I am up to and how do I feel as a journalistic on various issues and incidents in the world.

Now a days I am in US and there are Humphrey fellows form 10 different countries of the world. In fact many continents have gathered under one roof here. Separately, students from all countries are here in the Walter Cronkite School of Journalism and Mass Communication as well as in other academic disciplines of the Arizona State University, especially engineering and computer sciences. Interacting with the people from different countries at Student Centre, Cafeteria, Library, university bus and asking about their countries, dresses, language is a fun experience.

One of the major identity in branding is the country. Pakistan is my beloved country and I am like an ambassador

of my country, reflecting it through my dress, language, culture, norms and traditions. I am dispelling the wrong impression of my country built through selective exposure and negative portrayal of media. I am telling the global citizens the other side of the story, which is quite optimistic, bright and positive one. This will help people make a objecive view about the country in this global village.

Yes, the world has really shrunken due to the quick linkage based on Internet technology. Well, still that’s not the all story. When the world is shrinking and getting closer, there are still separate identities, cultures, languages, religions and so on. The conflict and clash is also there. Political scientist Samuel P. Huntington in a 1992 lecture used the word of “The Clash of Civilizations” argued that cultural and religious identities will be the primary source of conflict in the post-Cold War world. His prediction is true even today.

To me for becoming a global person and global branding, the formula is:

co-existance.   This is very simple …give respect and take respect.

For global branding the cost is the close circle socialization, which is on the decline. When you interact frequently with your global friends and followers you spend a lot of your time and ignore your near and dear ones. Two members of a family sitting in the same room talking to their friends in UK and UAE using their smartphones but not talking to one another. This is the cost of global branding. There it is. Things wouldn’t reverse, this has to go on and move ahead. However, my family members have also got their accounts on the social media and we are following each other. We are now a global family linked to journalists, teachers, students and people from other walks of life across the globe.

Being a journalist and a media academician I am trying to create a difference in my beloved country - Pakistan - in the lives of common people. Publishing The Educationist - the premiere education newspaper of Pakistan. Teaching journalism at Punjab University. Writing in Daily Times newspaper.

View all posts by shabbirsarwar1 →

2 Comments on “The Global Me, Pakistan and My Family”