92-year-old President Robert Mugabe is currently the oldest and one of the longest serving Presidents in Africa. Although Africa is gaining grounds in having Democratic governments, it’s rather moving at a slow speed with about 10 of the leaders still in control over 30 years after assuming office.
He is highly educated and may as well boast as being the only African President with seven different degrees including Masters and PhD. He was born on February 21,1924.

There are always divergent views when it comes to Mr Mugabe’s style of Leadership and how he goes about it. He led the land revolution take over from the whites after ruling his country for 20 years. This earned him great respect across Africa. He disparaged Nelson Mandela’s  approach to reconciling  with the whites in South Africa, saying he was too saintly.

A set of people believe Zimbabwe’s former colonial masters, Britain, ruled the country autocratically which eventually set the pace for Mugabe’s style of Leadership, thereby absolving him from total blame.

Mugabe has been accused of being racist and too critical of the western world. He still accuses the United States and United Kingdom for promoting white imperialism, decades after ending white minority rule in the country.

When compared with Adolf Hitler, he had this to say; ‘I am still the Hitler of the time…This Hitler has only one objective, justice for his own people, sovereignty for his people, recognition of the independence of his people and their right to their resources. If that is Hitler, then let me be Hitler in tenfold!’

Every election has been won by Robert Mugabe even when he

had strong oppositions. His well-known opposition,
Morgan Tsvangirai failed to dislodge Mugabe through a 2013
Presidential election which they say was characterized with
inadequacies, after serving as Prime Minister in his cabinet
between 2009 & 2013.
Despite the power sharing then, Mugabe refused to allocate
power to his Prime Minister, instead he took total control
vowing never to step down. He was also quoted to have said he
will contest in 2018.

Mugabe Quotes
• The only white man you can trust is a dead white man
• If President Obama wants me to allow marriage for same sex couples in my country, he must come here so that I marry him first.
• We have said we will never collapse, never ever. We may have our droughts, our poverty but as a people we shall never collapse
• South Africans will kick down a statue of a dead white man but won’t even attempt to slap a live one. Yet they can stone to death a black man simply because he’s a foreigner

Several unrest protesting the continued rule by Mugabe have been held in the country with police harassing, beating and arresting citizens and key opposition leaders.

According to reports, the economy of the country has been on the decline for several years.
From 3.8 in 2014 and 1.5 in 2015 but projected to increase to 1.6 in 2016, the situation of the economic growth is due to tight liquidity conditions, weak domestic demand, high public debt, drought, poor infrastructure, overvalued exchange rate among others.
In education, the literacy level in Zimbabwe is set to be around 80% and one of the highest in sub-Saharan Africa, some have attributed his feat to a lot of people looking up to him as a trained teacher with various degrees. 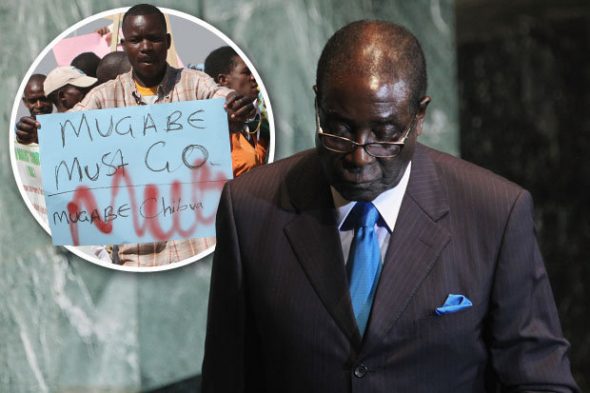 For a 92 year-old, it is not surprising that he would have health challenges. He has caused so many frenzies especially with clear signs that he is growing old and tired.

Despite different camouflage by his security details supporting him at public outings, Mugabe said he is still very strong and ready to go for another round of election.

President Robert Mugabe is a strong, fearless and resilient leader who wants the best for his people. However, he may be going about this in a very unpleasant way, by being the only voice in the country and not being civil enough to address issues

Allowing the opposition, liberating the people, bi-lateral relations with the international community and a general democratic rule may give Zimbabweans the desired country of their own but it looks like only a Divine Intervention would solve this!

‘’Amanpour: Mr President, don’t you think 89 years old would have been a great time to rest and retire
Mugabe: Have you ever asked Queen Elizabeth this question or it is just a question for African leaders?’’