Will racism increase in the United States if the Republican Candidate Donald Trump rises to power? 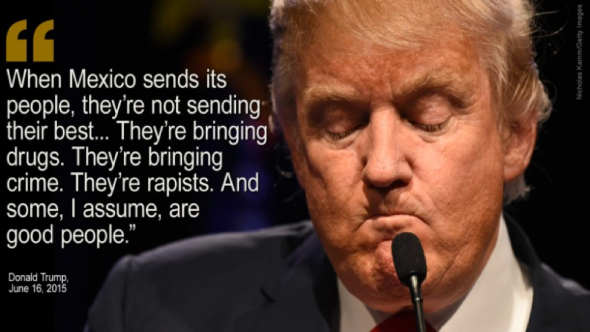 Last June on CNN, Reid Ribble a Republican congressman accused Trump of being a racist. In the dictionary, Racism is defined as the belief that some races of people are better than others. According to Eddie Moore Jr, founder and Program Director of the White Privilege Conference believes that “Racism wouldn’t be possible without any power”. To some extent this is true because Trump is creating a new world where bigotry and disgracing America is his number one priority.

In Moore’s case, racism can’t occur without political, economic or administrative power. Everyone can hate, have stereotypes or a prejudice on blacks and whites. However, until they have the power to carry out that hatred, there will still be prejudice. Based on this approach, if Donald Trump already has economic power and manages to obtain political power, will he setup a racist government as some people predict? In our case, Trump will certainly create a racist government where diversity wouldn’t mean anything. His plans to build a wall in order to fully separate the United States from Mexico is an issue. With this wall, he plans to keep Mexicans out of the United States because he believes that they’re creating problems for the USA. This is ridiculous and racist because America is made of immigrants. How does Trump plan to “Make America great Again” if he’s going to create issues between the people? These are not the values the United States was built upon. We need a leader who will establish relationships and continue our growth as a nation.

Finally, it’s clear that our current American society was built according to Moore with white supremacy principles. Education, for example, is designed on the basis of European-American values, putting away African-Americans who were enslaved for a long time (from 1619 to 1865). Moore believes that the US should compensate for their healing attempt to secular trauma. These white supremacists are the same individuals who consider Trump as a godsend for president. It’s the same reason that they are brainwashed on beliefs that don’t relate to anyone but the white majority. The minorities in the United States are being stepped on by these individuals in order to fix a hurting nation that probably doesn’t exist.

America is great already, we don’t need an individual like Donald Trump creating hatred across cultures. Instead we need a leader, who will continue caring for our nation and the world.

View all posts by sogazasuedu →